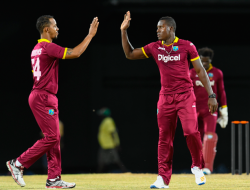 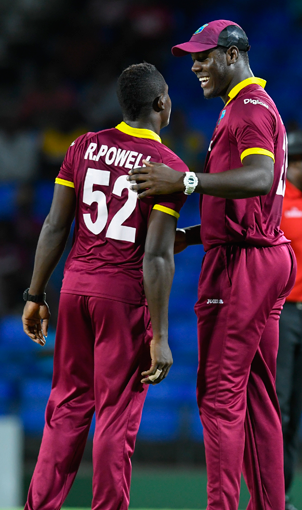 BASSETERRE, St Kitts (CMC) – West Indies captain Carlos Brathwaite has praised his side’s professionalism, after they trounced Afghanistan by seven wickets in Monday’s final Twenty20 International and complete a 3-0 series whitewash.Entering the series as heavy favourites to beat the ICC Associate nation, West Indies imposed their superiority to reduce each of the three games to a no-contest as they pulled off convincing victories in each.

The gulf between the two teams was especially evident in the final game as right-hander Marlon Samuels produced a stroke-filled career-best unbeaten 89 as the Windies easily chased down 147 to win by seven wickets.

“Marlon showed his experience, showed his class and he brought us home and the manner in which he did it was very, very clinical and it is very pleasing,” Brathwaite said.

“You talk about being professional … and when you have teams on the back foot about keeping them there and that’s exactly what we did … so it’s very, very pleasing to come away three-nil.”

He continued: “It would have been very easy to take a foot off the pedal and take this game for granted, lose the game, win the series 2-1 and be happy, but the professionalism shown today was very commendable, very admirable and kudos to my team for bringing home the series in a whitewash.”

Opting to bat first, Afghanistan posted the highest total of the series and when Chadwick Walton fell to the second delivery of the run chase without a run on the board, the Windies faced a challenging time.

But Samuels arrived to see off the Afghan challenging with a stroke-filled innings, that ensured there was no upset.

“The pitch was a lot better for batting than the first two games so we had to make some minor adjustments,” Brathwaite explained.

“They got up to a score that we think if we had executed our skills a little better we could have got them for 10 runs less but nevertheless the score was on the board, it was manageable and going into the half-time break, I asked that one of the batters raise their hand, not only get a score but get a big score and come not out in a winning cause.”

Brathwaite, however, reserved special praise for his bowlers who he said were superb throughout the series in keeping Afghanistan’s dangerous batsmen under tight rein.

“The bowling performance and the consistency, that is something we asked for so that one box was ticked,” he said.

“We (bowlers) did very well against Pakistan [in the recent series], we continually kept them down to 130 and as a bowling unit we strived to replicate what we did in that series.