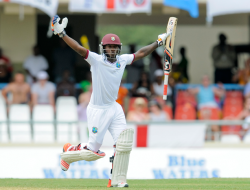 NORTH SOUND—West Indies legend Sir Vivian Richards has likened Jermaine Blackwood to “a bit of Collis King”, and believes the young Jamaican has the making of a “good batsman in the middle” for the West Indies in the long-term future.

Sir Viv, one of the greatest batsmen of all time, was speaking on the 29th anniversary of his world record 56-ball century against England at the Antigua Recreational Ground.

He was on hand to see Blackwood score his maiden Test match century, an unbeaten 112, on the third day of the opening Test yesterday.

“He reminds me sort of a guy like Collis King, a kind of batsman with that wonderful natural ability who can play the big, strong shots, but can also bat you out of a difficult situation,” Sir Viv said.

“He has the ability to play those ‘big’ shots … he’s a very confident young man … but today we saw a different kind of Jermaine. They bounced him and made life a little uncomfortable but he fought through that situation and proved he’s got guts and strength … you need that to make it in Test cricket.”

“He’s a very confident young man and he plays with that West Indies style and I like that. I definitely believe we have the kind of individual we are looking for in terms of someone who can hold down a spot in the middle order Test cricket is concerned.” CMC