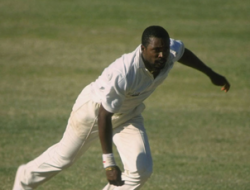 Phil Simmons has been suspended with immediate effect as West Indies coach, two days after he expressed his unhappiness with the ODI squad selected for the Sri Lanka tour. Simmons was caught unawares by the decision, which was communicated to him in an email from WICB chief executive Michael Muirhead, as he was in the UK preparing to join the squad in London on their way to Sri Lanka.

Simmons will now not travel with the team, and former West Indies fast bowler Eldine Baptiste, who is also a national selector, will take up the position of interim coach for the tour of Sri Lanka. The series, which begins on October 14, is the new Test captain Jason Holder’s first assignment.

“The West Indies Cricket Board has learnt of the comments from head coach of the West Indies team Phil Simmons in the print and electronic media which appear to question the legitimacy of the selection process of the one-day international squad for the tour of Sri Lanka. As a result, the management of the WICB has taken action to suspend the head coach, pending an investigation into the issue,” the board said in a statement. “The head coach will not now travel with the team on the tour of Sri Lanka.”

Though West Indies’ limited-overs squads for the tour had not been announced, Simmons revealed that “interference from outside” at a selection meeting on September 23 had kept allrounders Dwayne Bravo and Kieron Pollard out of the ODI side. Simmons said that he, as coach, and chairman of selectors Clive Lloyd had voted for their inclusion, but were outnumbered 3-2 despite Holder also wanting Bravo and Pollard in the team.

“I think it’s disappointing from the fact that I haven’t got the best 50-over ODI squad that we can select in the Caribbean,” Simmons had said at a media conference, at the conclusion of the West Indies training camp at the 3Ws Oval in Bridgetown. “The chairman, Mr Lloyd, he came and he gave an exceptional speech saying that he thinks it is time they are back in the squad and he gave exceptional reasons for them being back in the squad. Unfortunately, when we went into the selection [meeting] we lost it 3-2. Him and myself – the captain [Holder] doesn’t have a vote in this – but the captain also gave his views as to why they need to be back.”

Bravo and Pollard have not been considered for ODI selection since they were dropped for the series in South Africa in January this year, and their omission from the World Cup squad generated plenty of debate. At the time Lloyd had said he had spoken to the two players and explained to them that the selection panel wanted to move on and give youngsters more chances.