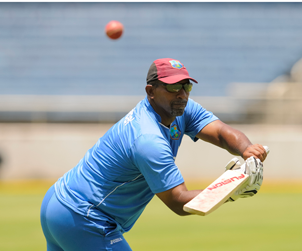 West Indies coach Phil Simmons has admitted he is “totally frustrated” by seeing West Indian cricketers light up the Big Bash League while his Test squad battles to be competitive. Simmons said it was up to the WICB to find a way to keep the region’s best players and he cited the example of New Zealand, a team with similar resources but which has managed to retain its stars for Test cricket.

Jason Holder’s young outfit collapsed to a three-day loss to Australia in the first Test in Hobart and they face the challenge of lifting themselves for the Boxing Day Test in Melbourne. Meanwhile, Andre Russell has been bowling with impressive pace for the Sydney Thunder, and Dwayne Bravo and Chris Gayle have turned out for the Melbourne Renegades, continuing their tour of domestic T20 tournaments.

“I’m totally frustrated,” Simmons said. “It’s enjoyable to see Andre Russell bowling at 140 clicks, and Bravo hitting three or four sixes, and Chris back in it. It is frustrating that we don’t have them here playing the Test series.

“But it’s something that’s been going on for a while and it’s up to the administration to work out how we get to the stage of, let’s say, New Zealand, because they have similar things and they’re getting all their players to play. It’s up to our administration and our bosses to find out how is the best way that we can get these guys on the pitch.”

It is not as simple as to say that all three men would be in the Test team if available, for Gayle has a back injury that will affect his chances of ever adding to his tally of 103 Tests, and Bravo was not picked for a Test for more than four years before he officially retired from the format in January. This month, Bravo said he remained committed to West Indies cricket but was unhappy with the way players were treated in the Caribbean.

“It’s gets frustrating … not only for myself but all the other cricketers: Gayle, Sammy, Pollard, Russell,” Bravo told the Age last week. “We’re all committed to West Indies cricket, but sometimes with the way we’ve been treated over the years, sometimes we second guess and ask ourselves why should we actually fight with West Indies’ cricket [administrators] when the rest of the world are opening their hands for us?”

Gayle and Bravo are both in their 30s but Russell, at 27, is a man who could still offer West Indies many good years, but he has played only one Test five years ago and believes his knee would not stand up to Test cricket. But chairman of selectors Clive Lloyd said in January that Russell was one of the best allrounders in the world and could be in the Test side if he was willing to play.

“It’s such a waste that we have a guy who could be a great cricketer who is now not thinking of playing both formats,” Lloyd said in the 2015 New Year’s Lecture in Cape Town. “We have contracts, probably not as exorbitant as others, but they are getting good money. It doesn’t seem playing for our country is paramount where these players are concerned.”

Lloyd has arrived in Melbourne ahead of the Boxing Day Test, and will help mentor Holder, who at 24 faces the enormous challenge of leading a side of limited talent while also finding his own way in the game, having played only 11 Tests himself. In the absence of some of the region’s more senior players in the squad, Holder has had to rely heavily on the off-field staff of past legends to help him develop as a captain.