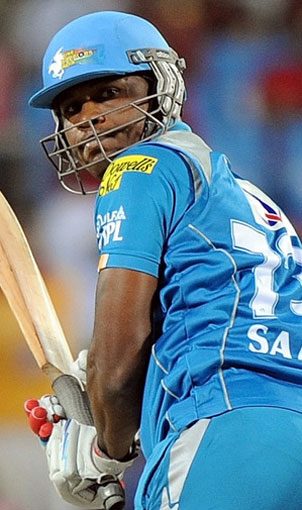 Delhi Daredevils have brought in Marlon Samuels as a replacement for the injured wicketkeeper-batsman Quinton de Kock, for the remainder of the season. De Kock had been ruled out of the IPL with an injury to his right index finger he picked up during the New Zealand tour last month. Samuels is expected to join the Daredevils squad on April 29.

Samuels was among the unsold players in the IPL auction this year, with a base price of INR 100 lakhs. He last played in the IPL over four years ago, in 2013 for Pune Warriors, the only franchise he has represented so far. In 2012, he played eight matches for them to score a total of 124 runs and take eight wickets. In 2013, he featured in only two matches, with scores of 5 and 3, and only one wicket to his name.

Daredevils, currently placed second from bottom with only two wins from six matches, play their next match on Friday, against table-toppers Kolkata Knight Riders at Eden Gardens. While Daredevils posses one of the best bowling attacks this IPL, their batting has cost them a few matches so far. Not one of their batsmen features among the top 10 run-scorers this season and they will further lose overseas recruits Sam Billings and Chris Morris in the coming weeks. Samuels’ inclusion is likely to beef up an inexperienced batting line-up that features domestic batsmen such as Shreyas Iyer, Karun Nair, Rishabh Pant, Sanju Samson and Aditya Tare.