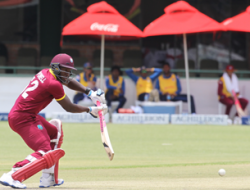 The fate of West Indies cricketer Andre Russell is to be known in “two to three weeks’ time” when the Independent Anti-Doping Disciplinary Panel completes deliberating whether he is guilty of a whereabouts violation.

Russell, 28, is accused by the Jamaica Anti-Doping Commission, represented by attorney at law Lackston Robinson, of failing to file whereabouts on three occasions in a 12-month span.

Under World Anti-Doping Agency (WADA) regulations three whereabouts filing failures during a one-year period amount to a failed test, which may attract a ban of up to 24 months.

Over the course of the hearing, which began in September, Queen’s Counsel Patrick Foster, who is the lead attorney representing the Jamaican Russell, has maintained that the respondent was not negligent in the alleged whereabouts failure.

Additionally, Foster has probed the basis of the last two purported filing failures, which both fall in the July to September quarter.

Yesterday was to begin with the oral final submission from Russell’s legal team. However, a battle of words ensued between Foster and Robinson after the latter challenged whether items in the respondent’s written submission, which were exchanged earlier this month, were permissible.

Robinson suggested that Russell’s legal team may have “abandoned their defence entirely” and had added elements related to the last two alleged filing failures which were not part of the evidence submitted.

Foster responded that issues raised came out during the presentation of evidence at the hearing. Russell’s lawyer added there was “no prejudice” against the complainant and that the objection was “without merit”.

But Robinson countered that Foster move was not in the spirit of a “fair hearing”.

Chairman Faulkner, after deliberating with the other two panel members, said the hearing was “bound by fairness” and said rules are less stringent with regards to submissions.

He said panel would allow submissions by both sides to continue without limitations. Faulkner explained that he “does not believe that fairness will be injured” in the panel’s final deliberation.

Though Faulkner’s intervention settled that matter, that early 30-minute exchange was to set the tone for a number of tempestuous clashes between the two for the rest of the morning and deep into the afternoon.

Foster began his almost two-hour-long submission and said the onus was on the complainant to prove a violation and that the third alleged failure was “not supported by evidence”.

Russell’s lawyer also said that the second purported failure was unfair to the respondent and came in the midst of a maze of e-mails between Russell or his representative and JADCO.

He argued that the attempts to communicate show that Russell was willing to comply. He charged JADCO’s handling of Russell’s last two apparent filing failures was mired in “confusion, miscommunication and chaos”.

Foster said evidence presented showed that JADCO’s protocol and what transpired on some occasions were two separate things. He posited that Russell’s testimony was open and, if anything, the cricketer only seemed overwhelmed and frustrated by the process.

He called for the complainant’s case to be dismissed.

Foster, in ending, said that out of an abundance of caution, he believes that in the case of a guilty verdict, that Russell’s willingness to be tested overseas as well as in local jurisdictions meant that “no more” than a year’s ban would be an appropriate penalty.

Robinson, who went for about 20 minutes shy of four hours in his oral submission, stressed that athletes are always responsible for filing their whereabouts. He argued that whether an athlete was compliant or not in the past should have no bearing on possible culpability in this case.

He said Russell failed to comply with the deadline for filing whereabouts in all three instances. He noted those deadlines were December 31, 2014, June 30, 2015 and July 24, 2015, respectively.

He said JADCO merely needed to establish that the athlete was notified and secondly, that he did not comply. Robinson insisted that JADCO does not need to prove negligence.

On the matter of dates for submitting whereabouts, Robsinson said JADCO has the power to fix deadlines and also to extend them.

He said various options were available to Russell to submit his whereabouts and that the player did not use them.

Furthermore, the JADCO lawyer said that Russell did not provide “objective evidence” as to why he did not. He asserted that Russell’s testimony showed he was “not a witness of truth”.

Robinson then accused Russell of being guilty of “gross negligence” and said that the player “didn’t care”, hence the alleged whereabouts breach.

He was integral to the West Indies team that won the 2016 T20 Cricket World Cup in India in April.

Russell also starred as Jamaica Tallawahs lifted the Caribbean Premier League T20 crown for a second time back in August.