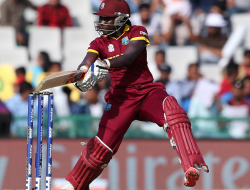 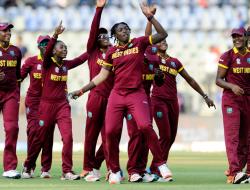 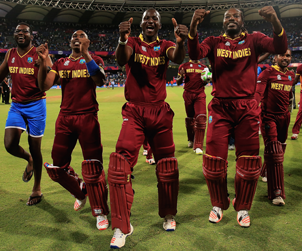 2 Number of successful chases in all World T20s higher than West Indies’ 193 against India in Mumbai. The highest successful chase in a World T20 was also in this tournament, also at the Wankhede – England’s chase of South Africa’s 230.

77.60 Average runs per wicket in this match, the highest in a T20I. A total of 388 runs were scored in 39.4 overs for the loss of five wickets. The first match of the 2007 tournament, between South Africa and West Indies, is the only other World T20 game with an average of more than 50.

192 India’s total was their second highest in World T20s and their highest against West Indies.

82* Lendl Simmons’ score in this match – a career best performance that earned him his second Man-of-the-Match award in this format. Andre Russell also made a career-best score – 43 not out – after facing at least 20 balls for the first time in a T20I, and had a fourth-wicket partnership of 80 at 12.30 runs per over with Simmons. The 177 runs added by West Indies’ third (97 between Simmons and Johnson Charles) and fourth wickets are the most for those wickets in a T20I innings.

11 Sixes off India’s bowling, equaling the second most they have conceded in a T20I. During the Super 10s stage, India had gone for only 14 sixes in four matches. Fast bowler Jasprit Bumrah, who did not give a six in 96 balls in the Super 10s, got hit for two by West Indies.

6 Number of batsmen who scored 40 or more in this match, equaling the most in a T20I. There were six 40-plus scores in the Ireland-Netherlands game in the 2014 World T20.

3 Consecutive T20 half-centuries for Simmons in India. He scored 65 and 68 in the first qualifying final and final of the 2015 IPL, and his 82 in this match was his first innings in India since.

1 India’s innings was the first in a World T20 to contain three partnerships of 50 or more. Rohit Sharma and Ajinkya Rahane put on 62 for the first wicket, Rahane and Kohli added 66 for the second, and Kohli and MS Dhoni combined for an unbeaten 64-run stand. It was the second time India had three 50-plus stands for the first three wickets in a T20 international; no other team has done it.

16 Kohli’s scores of 50 or more in T20Is, the most among batsmen after he passed Chris Gayle and Brendon McCullum, who have 15 each. Kohli shares the highest number of 50-plus scores without a century in all T20 cricket – 39 – with Gautam Gambhir.