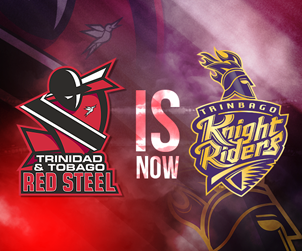 PORT-OF-SPAIN—Trinidad and Tobago Red Steel have been renamed Trinbago Knight Riders in a move that reflects the vision of the new Indian owners to make the brand a truly global one.

The franchise was purchased last season by businessman and Bollywood star Shah Rukh Khan, who is also a co-owner of established Indian Premier League side Kolkata Knight Riders.

“The acquisition of the Trinbago franchise is consistent with our vision to expand the ‘Knight Riders’brand globally,” said Venky Mysore, chief executive of KKR.

The T&T franchise are the reigning CPL champions after defeating 2014 champions Barbados Tridents in the final of the tournament. They have been one of the more successful teams, reaching the semi-finals of the inaugural tournament in 2013 and the following year. This year, they managed to acquire off-spinner Sunil Narine from Guyana Amazon Warriors, to reunite him with the KKR brand. Narine plays for KKR in the IPL. Despite the name change, Shah Rukh Khan said he did not expect Trinbago Knight Riders to lose the local flavour.

“It is a great honour to become part of the rich cricketing tradition of Trinidad & Tobago,” he said.

“We will do everything to uphold the tradition and thank all the people of Trinbago in advance for their passion and support.”

The CPL draft is set to take place in Barbados on Thursday ahead of the start of the 2016 campaign in June. (CMC)