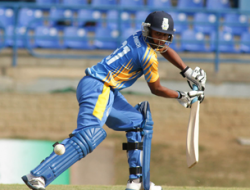 The T&T Red Force cricket team will be going out to do battle against the Windward Volcanoes from 3pm today at the Queen’s Park Oval in Trinidad, looking to make a good start against their nemesis in the opening round of matches in the 2016/17 Digicel Professional Cricket league.

The Volcanoes have won five of their last seven matches against the Red Force, including the last three occasions they have played in T&T.

New Red Force captain Yannick Ottley think his young team can make an impression. “Our preparation has been good so far and it is all about going out and do well for our fans. It is important that we get a good start to this tournament on our home ground.

“I did lead the team a couple times before and I am grateful for the opportunity to do it again. The guys have supported me in the past, they appreciated me and now is just about getting the guys to perform to the best of their ability.”

Ottley’s opposite number Liam Sebastien has downplayed his team success in the past against T&T: “It is important to get winning start, as this is a new tournament and day/night fixture. We cannot dwell too much on the past we just have to go out there  and get the job done.

“We have been training very hard, we have been putting in a lot of sessions and even had a short tour of Antigua. This means that the preparations have been good and the players should be ready to perform well in this first match.”

Last season, the Volcanoes finished close to bottom of the six-team table and Sebastien wants better batting to lift them this time around. “We need to improve on the performance from last year, we accepted that we didn’t do well and looking to get higher up this year. We didn’t bat well at all last year, we could not gain that many batting points and when this happens you obviously have a low score to defend and lose more often that not.”

Today’s game will be the first of six day/night matches carded for this tournament as the WICB is looking to give the regional players exposure to these conditions because the ICC is now taking Test cricket in this direction.