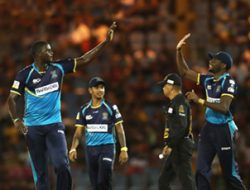 Debutants Impress With Bat and Ball As Tridents Crush... 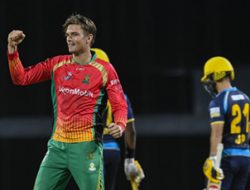 Guyana Make It Six In Six Against Tridents 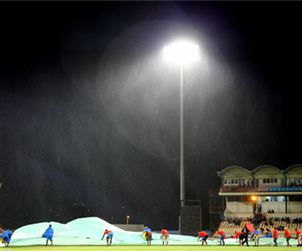 Rain was the winner after only 12.2 overs were possible in Saturday’s Hero Caribbean Premier League (CPL) clash between St Lucia Zouks and Trinbago Knight Riders at Daren Sammy Stadium.

Colin Ingram was the star of what play was possible, getting off the mark with two sixes within the first four balls he faced and making his way to 52 not out from 36 before the rain arrived.

He put on 51 for the third wicket with Colin de Grandhomme (17 from 16) after Andre Fletcher and John Campbell both fell to the first ball of new spells.

Fletcher was caught by Khary Pierre off Ali Khan’s first ball of the night, while Campbell was superbly caught and bowled by Jimmy Neesham, who stuck out a right hand in his follow-through to pouch a ball hit back at him with interest.

Neesham had a far simpler task to dismiss de Grandhomme when his New Zealand team-mate miscued Kieron Pollard straight to him at cover, while Rahkeem Cornwall – moved down the order to number five for this game – sliced Pierre to Khan at short third-man from the final ball before the rain arrived.

Both teams take a point apiece from the abandoned game, leaving the Knight Riders a point behind Guyana Amazon Warriors at the top of the table while the Zouks move within a point of Barbados Tridents in the final playoff spot.

The Zouks are next in action against St Kitts & Nevis Patriots on Tuesday, while the Knight Riders now travel to Barbados to face the Tridents on Thursday.