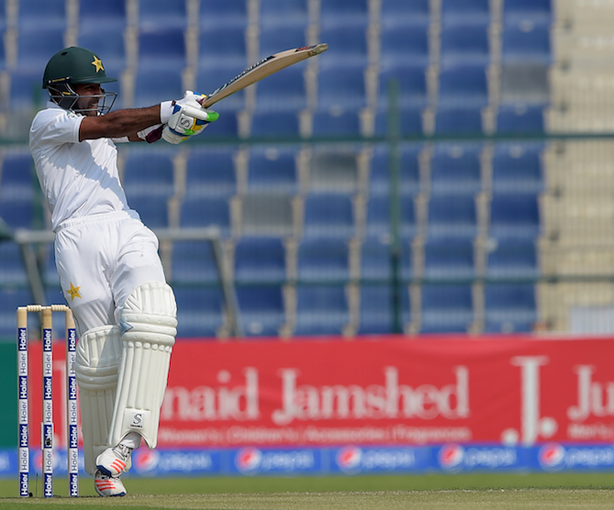 A half-century from Asad Shafiq, full of intent, drove Pakistan’s momentum through a first session in which they lost both their openers for low scores after choosing to bat first. From an uneasy 42 for 2 in good batting conditions, Shafiq and Younis Khan steadied Pakistan, putting on an unbroken half-century stand for the third wicket to take them to lunch at 95 for 2.

Shafiq walked in in the fifth over, after Azhar Ali played on to Shannon Gabriel, looking to drive through the covers and getting undone by a bit of inward seam movement and the ball not quite coming on off the pitch. He got going almost immediately, rising to his toes to cut Gabriel for four off the second ball he faced. In the next over, he punished another short ball, this time swivelling to pull Miguel Cummins through square leg.

Shafiq continued to play his shots, moving confidently forward to ease drives through the covers and nimbly back to cut and pull deliveries from Devendra Bishoo that were only marginally short. As he sparkled at one end, Sami Aslam played a strange innings at the other. He seldom got the strike, and barely scored any runs when he did, while not looking particularly troubled by any of West Indies’ bowlers. By the end of the 13th over, he was batting on 6 off 28 balls and Shafiq on 32 off 44. Then, off the second ball of the 14th over, he looked to drive Bishoo through the covers, against the turn, and was bowled through the gate by a dipping legbreak.

In walked Younis, back in the side after missing the first Test to recover from a bout of dengue fever. He got an early freebie from Bishoo, wide and overpitched, to smear through the covers, but that was his only boundary in the 62 balls he faced before lunch, as West Indies tightened their lines and lengths. There was little in the conditions to challenge either batsman – only one ball turned really sharply, Roston Chase forcing Shafiq to defend hurriedly after shaping to cut – and Younis moved safely to 29 without always looking at ease.

His shuffle across the crease caused him a couple of uneasy moments: Cummins found his leading edge while he tried to work through the leg side, and Jason Holder got him to nick the ball when he moved across rather than forward, towards the ball in defence, but both balls fell safely short of fielders.

Younis replaced Babar Azam in Pakistan’s side. They also rested fast bowlers Mohammad Amir and Wahab Riaz, bringing in Rahat Ali and the left-arm spinner Zulfiqar Babar in their place. The inclusion of Babar gave them an extra spinner apart from Yasir Shah and Mohammad Nawaz. West Indies made one change, Shai Hope replacing the wicketkeeper Shane Dowrich, who pulled up injured while warming up.