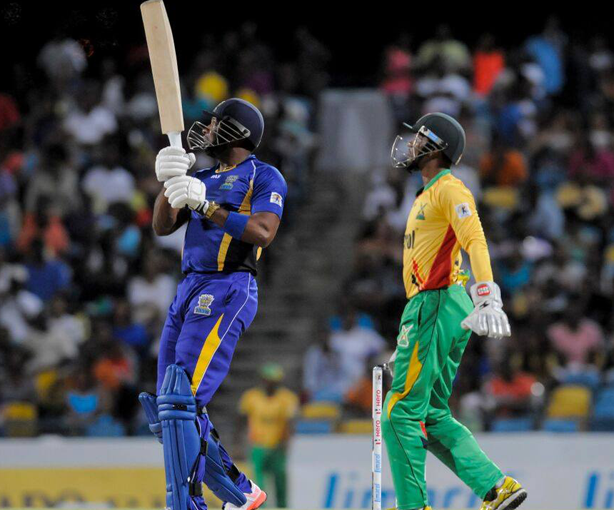 Kieron Pollard’s all-round brilliance was the centrepiece in Barbados Tridents’ crushing win against Guyana Amazon Warriors in the opening game of the Caribbean Premier League, in Bridgetown. Pollard smashed 48 off 26 deliveries to inject momentum into a flagging innings and helped his team raise a challenging total of 158. He then rotated his bowlers well, himself striking twice, to bowl Amazon Warriors out in 18 overs.

The match-up, a repeat of the controversial final last season, promised much with both sides loaded with experienced T20 campaigners from around the world, but turned out to be rather one-sided, with Tridents, again, the winners.

Opting to bat first, Tridents lost their openers within the first five overs and would have struggled further had it not been for Jonathan Carter’s three sixes. Carter was dismissed in the 11th over, caught in the deep off Sunil Narine, with Tridents on 67. Pollard walked in at that stage to join Shoaib Malik, took a couple of overs to settle down, before hitting a six and a four off the first two balls of the 14th over. Ronsford Beaton was then carted away for 15 runs in the 16th over.

By the time the partnership between Pollard and Malik ended, 56 runs had been added in six overs. Pollard was dismissed two short of his half-century but Navin Steward, who hit consecutive sixes in the 19th over, ensured the team had a big finish.

Amazon Warriors needed just that at the start of the innings but ended up losing three wickets – Lendl Simmons, Shiv Chanderpaul and Denesh Ramdin – in the first four overs. Pollard ensured there was no fightback by dismissing Tillakaratne Dilshan in his first over. When Robin Peterson dismissed Brad Hodge in the next, Amazon Warriors had lost half their side. There were no surprises thereafter.