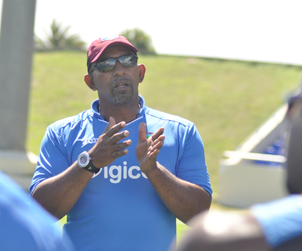 In a strongly worded press statement released yesterday afternoon, Prime Minister Mitchell expressed his “disgust” with the decision and says it is not in the best interest of West Indies cricket.

West Indies Cricket Board (WICB) announced the sacking Tuesday as the team was preparing to leave for the United Arab Emirates for a series against Pakistan in all three formats of the game.

“The decision to fire Coach Simmons is consistent with the actions of this current WICB, whose actions are usually motivated by spite and vendetta, rather than by what is in the best interest of West Indies Cricket,” said Prime Minister Mitchell, who is New York on state business.

“I wish to go on record to register my disgust, (although I am not surprised), at this latest move by the Board, which will only be disadvantageous to the game and the players who have come to know and love working with Coach Simmons”.

Since taking up his assignment with the WICB after an eight year stint with Ireland, Simmons has had a tumultuous relationship with the Dave Cameron led administration.

He was suspended for public pronouncements over the omissions of all-rounders Dwayne Bravo and Kieron Pollard from the one-day squad last year, but was reinstalled after issuing a public apology.

“Coach Simmons had a positive impact on the players and could have resurrected West Indies cricket if he was allowed to create a learning environment for his players,” said Prime Minister Mitchell.

“Instead, he was stymied by uncooperative administrators, antiquated structures and systems, and by a hostile working environment. Once again the Board failed to see and seize a glaring opportunity”.

The Grenadian leader, a former national cricket captain and ardent follower of the game, also lamented the steady decline of West Indies cricket in the last two decades , saying : “The Board’s major problem over the years has not just been its leadership: some of its former leaders were competent people”.

“However, it has been doomed to failure because of the environment and structures in which it has operated. Structure controls behavior and performance,” said the Grenadian leader who has been spearheading efforts to restructure the WICB, as Chairman of Caricom’s sub-committee on cricket governance.

“If reform and restructuring are not incorporated in the Board’s improvement plan and strategy, West Indies cricket will remain trapped in its ever-increasing failure spiral”.

WICB has rejected new proposals for reform contained in a CARICOM governance report in which the main recommendation is for the body to be dissolved.

Prime Minister Mitchell described the current WICB as “inflexible and autocratic” while noting an increase in conflict between board and players in recent years.

“The Board has now become an extremely inflexible and autocratic unit in which power and control dominate. Cricket development and cricket performance appear to be low on the Board’s list of most important priorities,” said Dr.Mitchell.

In its statement Tuesday, the WICB said its decision to fire Simmons was based on public pronouncements of the coach as well as differences in culture and strategic approach.

“The Board is satisfied with its losing culture and will get rid of anyone who questions or challenges that culture,” Dr.Mitchell added. (CMC)