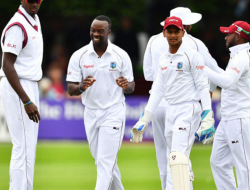 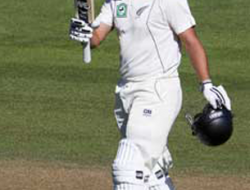 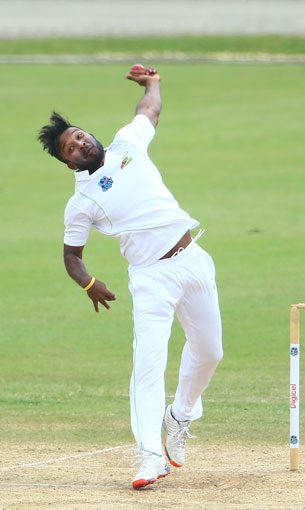 LEFT-arm spinner Veerasammy Permaul’s 24th five-wicket haul has given the Guyana Jaguars full control at the end of day one of their sixth round Cricket West Indies (CWI) Professional Cricket League (PCL) Four-day game against the Windward Islands Volcanoes at the Guyana National Stadium, Providence yesterday.

Permaul, playing in his 99th first-class match, initiated a rapid Volcanoes’ batting collapse, as the tourists capitulated to 117 inside the second session.
The 28-year-old bowled 21.3 overs from the media centre end to finish with figures of 5-40, as the Volcanoes endured another disappointing first innings total. Tyron Theophile (33), Dennis Smith (20) and Devon Smith (16), were the only scores of note.

Fellow left-arm spinner Gudakesh Motie snapped up 2-11 while Sherfane Rutherford (2-27) and Keemo Paul (1-19) were the successful bowlers, as the tourists lost their last seven wickets for just 62 runs.

Opener Tagenarine Chanderpaul buttressed the Jaguars’ effort with an unbeaten 27, as the hosts closed on 78-2. Test batsman Vishaul Singh is the other not-out batsman on seven.
Earlier, Jaguars skipper Leon Johnson won the toss and elected to bowl. However, openers Smith and Theophile successfully survived a testing 12-over morning spell from the Jaguars’ pace attack.

The new-ball combination of Keon Joseph and Paul beat the bat on several occasions in conditions encouraging swing and seam bowling, but they failed to make the breakthrough.
But, a double bowling change eventually provided the first wicket when Smith, who is the leading run-scorer this season, edged one from Rutherford to wicketkeeper Anthony Bramble to place the visitors at 26-1.

Taryck Gabriel contributed just four runs to the visitors’ score before he pulled a long hop from Permaul to mid-on while Miles Bascombe was bowled without scoring on the stroke of lunch, at 55-3.

Theophile, who was dropped on seven when substitute fielder Romario Shepherd put down a difficult chance at cover, survived the session, and was unbeaten on 26 at lunch.
After the interval, Permaul maintained his stranglehold on the Volcanoes’ batting lineup, trapping Theophile leg-before-wicket. Paul then had Donwell Hector (10) while Rutherford removed Roland Cato (1), caught at the wicket to set the final slide in motion.

Things went further downhill for the visitors when Permaul bowled Kyle Mayers for one. Smith and Shane Shillingford (12) then added 33 for the eight-wicket before Motie trapped Shillingford plumb in front. Permaul then completed his five-wicket haul with the final wicket of Delorn Johnson.

The two Guyanese left-handers then made a cautious start, but as the innings progressed Hemraj stroked six elegant boundaries before he was bowled by medium pacer Shermon Lewis for 29.

Lewis then removed Johnson, caught at the wicket for four, but Singh and young Chanderpaul kept the visitors at bay when play ended with five overs remaining.
Play resumes this morning at 09:30hrs.