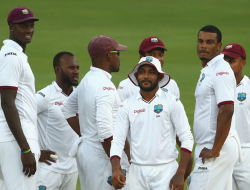 Pakistan’s bowlers held their nerve to seize a 56-run win over West Indies after an intense, attritional fifth day in Dubai, in which Darren Bravo led his side’s plucky tilt at a come-from-behind victory. Bravo scored a 249-ball 116, taking his side to within 83 runs of the target, before Pakistan finally overcame his dogged resistance to wrest back a match that had looked like slipping away. They wrapped it up with 12 overs remaining, to register a memorable win in their 400th Test.

For much of the final day, Bravo proved to be an immovable object at the centre of the Dubai cricket ground. He carried forward his fine form and doughty resistance from the first innings, showing the application and patience to rebuff whatever Pakistan threw at him. His forward defensive shots, of which there were many, were perfectly middled, and he was equally convincing when leaving the ball. On occasion, he unfurled one of his crisp drives or cuts to the off-side boundary, but his knock was more about grit than flair.

Bravo began the day batting on 26 off 67, with West Indies on 95 for 2, still 251 runs short of their target. After seeing Marlon Samuels depart off the first ball of the day and losing Jermaine Blackwood inside the first hour, Bravo shared a fighting 77-run fifth-wicket stand with Roston Chase and continued his vigil well after Chase departed. As West Indies pursued what would have been their second-highest successful chase, more and more came to depend on Bravo. He shouldered that burden until almost an hour into the final session. But with 83 runs to win and four wickets in hand, he played a tired drive off Yasir Shah, managing only to squirt the ball back towards the bowler, whose sensational diving catch was the last, decisive turn on a gripping final day.

Yet West Indies had made Pakistan work much harder for the win than they would have expected after a promising start to the day. After Pakistan’s demoralising collapse on the previous day, Amir’s first-ball wicket was just the tonic they needed. It was a rather unremarkable delivery, bowled from around the wicket, pitching on a good length well outside off and angling in. Samuels was drawn into poking at a ball he could easily have left and a thin edge was gleefully accepted by Sarfraz Ahmed behind the stumps.

Blackwood, coming in at No. 5, played a scratchy knock, fishing at balls outside off, with the bat well away from the body. He got away with numerous plays and misses against Amir, as well as a checked drive off a slower ball that fell between mid-off and mid-on. But it was to spin that he perished, when he played a length ball from Mohammad Nawaz from deep in his crease and was wrapped on the pads in front of leg stump.

Chase then joined Bravo for a partnership that steadily revived West Indies and unsettled Pakistan over the course of 28.2 overs of stubborn fight. Wahab and Sohail Khan tested the batsmen with occasional bouncers and yorkers, Amir bowled probing lines, the spinners plugged away – but Bravo and Chase looked untroubled through it all.

By the 71st over, Chase’s confidence had grown to the extent that he dared to drive Yasir against the turn for a boundary through midwicket. Perhaps that was when confidence became overconfidence. Next ball, Yasir flighted another one pitching outside leg and Chase attempted the same shot again. This time the ball turned past his outside edge to crash into leg stump.

Two balls later, Wahab yorked Shane Dowrich to hit his middle and off stumps, sending him back for a first-ball duck. West Indies were now reeling at 194 for 6, and Pakistan had a firm grip on proceedings again.

But Bravo was still at the crease and he had his captain, Jason Holder, for company. The two men saw the side through to dinner, leaving 114 to win in the final session. They continued to chip away at the target after the resumption, and Pakistan’s anxiety gradually built. When Amir wrapped Holder on the front pad with a delivery that appeared to be sliding down, Pakistan’s review of the not-out decision seemed more out of desperation than expectation. Hawk-Eye gave them no respite.

Another hopeful review followed when Yasir’s appeal for a catch at slip was turned down. The ball had gone off Holder’s pad. Pakistan had no reviews remaining. West Indies were 84 runs from victory. The tension was mounting.

Two balls later, Yasir flew to his left to take the return catch of Bravo that decisively swung the match in Pakistan’s favour. West Indies’ last three wickets added 26 runs, but the sting had gone out of the contest, and a pair of run-outs handed Pakistan a hard-fought win.