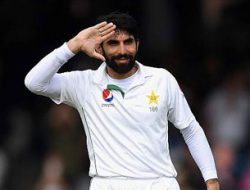 There was no knockout punch today, more gradual asphyxiation. As genuine moments of excitement and drama came few and far between, Pakistan, quietly and ruthlessly, wrapped the West Indies in a bear-hug and slowly squeezed the life out of them. There was some exceptionally generous bowling – Ahmed Shehzad made 70, having been gifted three lives – but Pakistan were efficient enough to capitalise on those mistakes, and end day two in a commanding position.

West Indies eventually perked up halfway into final session, taking three wickets for six runs to send Azhar Ali and Misbah-ul-Haq back into their shell. But with an opening batsman not out on 81, alongside a captain who loves a firefight, there was a lot of work left to do for Jason Holder’s men.

For now, though, they can be relieved they were even able to take wickets. Devendra Bishoo extracted an outside edge from Shehzad to have him caught at slip with the score at 155. The Pakistan batsman had enjoyed a charmed life; he had a catch dropped as early as the third over, and was dismissed twice off deliveries that turned out to be no-balls. Shannon Gabriel was the first culprit, Roston Chase was the other. Shehzad made the most of it, but the question of whether he has returned to form is very much up for debate. He went through periods in his innings where run-scoring almost screeched to a halt; at one point, he made three off 59 balls.

West Indies were buoyant when they followed up Shehzad’s wicket with those of Babar Azam and Younis Khan, the heir-apparent and the master. You would have to search far and wide to find a Younis dismissal off a poorer delivery than the one that felled him for a duck in Bridgetown. Bishoo bowled a classic long hop, and the batsman gave it the whack it was begging for, only he picked out short midwicket. Azhar and Misbah then went into power down mode, scoring 11 runs off their 58-ball partnership, ensuring there was no further damage.

The day had begun with a couple of West Indian wickets that were mirror images of each other. Holder attempted leave when a shot should have been played, and Chase attempted a shot when the ball was better off being left. But the effect of their dismissals was the same; it wrenched all the momentum the home side had built up over a painstaking 132-run partnership, putting them back to the place they are so dreadfully familiar with: square one.

A breezy partnership between Alzarri Joseph and Bishoo ensured the West Indies made it past 300 but the optimism with which they had begun the day had long since evaporated. Mohammad Abbas – the most successful bowler today – got rid of Bishoo soon after. Yasir Shah cleaned up Joseph next over, and West Indies found themselves shot out for 312.

The Pakistan openers then consolidated their position of strength, although the cricket they played to get there fell some way short of attractive. Azhar and Shehzad combined for a century partnership, buying themselves precious time after coming in for sharp criticism for their lack of runs in the first Test. Some of their watchfulness was down to disciplined bowling from the West Indian quicks, although it was noteworthy that the sustained pressure never really felt like spilling over into a wicket.

The hosts could have done better to exploit a rapidly wearing pitch. There were balls that Azhar and Shehzad had to dig out from ankle-height, while the footmarks outside the off stump gave wings to the offbreaks pitching into them. The abrasiveness of the surface impacted the ball too, scuffing it up so badly that it had to be changed twice. Even so, Pakistan found ways to hang on, and though it wasn’t always pretty, it certainly was pretty effective.