Ambrose anxious to bowl in charity match for Dominica 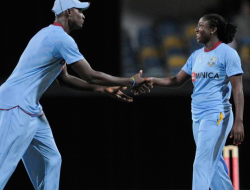 28th September 2015 Comments Off on Outside influence kept overlooked cricketers out Views: 1142 News

West Indies coach Phil Simmons regretted the fact that external influences did not allow the re-inclusion of Dwayne Bravo and Kieron Pollard in the ODI squad. West Indies are touring Sri Lanka for a one-month tour that begins from October 14 and includes two Tests, three ODIs and two T20Is.

Simmons, who took charge of the West Indies squad after the 2015 World Cup, said that the Chairman of selectors Clive Lloyd and captain Jason Holder wanted to include Bravo and Pollard in the squad but certain people used their influence to overrule the decision.

Speaking to the reporters on the final day of the West Indies camp at the 3Ws Oval in Barbados criticized the interference and went on to say that such politics has kept West Indies from having their best squad. However, he did not specify who exactly was responsible for the politics.

“Unfortunately, when we went into the selection (meeting), we lost it 2-3. Him and myself—the captain doesn’t have a vote in this—but the captain also gave his views as why they need to be back.”

“I don’t think that it (selection) was done as professionally as it should be done, (there was) too much interference from outside and in this case, I even go as far as saying maybe influence because the reasons that were given for them being out,” Simmons lashed out. “It’s disappointing for me because we want to have our best squad, the chairman put it to us that we need to have our best squad and it’s not so, so I’m disappointed about that squad.”