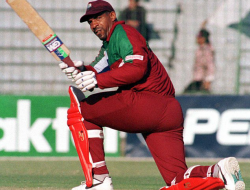 South Africa are not the only country to have struggled with knockout games in previous World Cups. New Zealand have won only one such match. But how have they made it to – and lost – six semi-finals then? In five of those World Cups the semi-finals were not preceded by a quarter-final, but by group or round-robin combat.

That history, however, will not impact Brendon McCullum’s side being billed as overwhelming favourites to beat West Indies at the Regional Stadium on Saturday.

New Zealand have spent the days leading up to the quarter-final training, resting, and signing autographs and being part of ‘selfies’ at a fan event. They have been out and about – one Wellington resident said on Twitter that she walked past Trent Boult at the post office – embracing the increasing love and expectation, fully aware that this is a special time in their lives. They have confidence in their aggressive game, though McCullum understates it, and unless they have a shocker it is hard to see them not doubling that tally of one knockout victory in World Cups.

Over the last few days, several people from the West Indies camp – Darren Sammy, Curtly Ambrose, Jason Holder and Clive Lloyd – have acknowledged that not many people gave their troubled campaign a chance of getting this far. With Chris Gayle struggling with his back and the rest of the West Indian top order mis-firing, there is an acceptance of being the underdog. Unlike Ireland, who narrowly missed out on this quarter-final, the West Indies team is often less than the sum of its parts despite being filled with players capable of astonishing individual feats. But nothing less than unison will be enough to derail New Zealand.

March 21 is the equinox, the date after which nights get longer in this part of the world. All of New Zealand will hope their World Cup summer lasts another week.

Gayle’s dodgy back. Without him the West Indies top order looks paper thin, and more so against arguably the best new-ball attack in the World Cup. Gayle has a cortisone injection in a bid to play the quarter-final, and if he does, but is even a trifle slow in his movements, Tim Southee and Trent Boult could be too good for him. Would West Indies risk anything than a less-than-fully-agile opener against two quicks on top of their game?

McCullum and the New Zealand fast bowlers have headlined their World Cup campaign, but Corey Anderson has been an important part of their success. He’s scored 158 runs at an average of 39.50 but more importantly taken 10 wickets at an average of 13, strike rate of 16, and economy of 4.82. His bowling success has ensured McCullum hasn’t had to use a sixth bowler too often. Kane Williamson and Grant Elliot have had to bowl only eight overs in the World Cup.

McCullum said New Zealand were likely to make only one change to the XI that beat Bangladesh to make it six wins out of six in the group stage: Adam Milne, who missed that game with an injured shoulder, was set to replace Mitchell McClenaghan.

If Gayle is fit to play, a decision on that will be taken only on Saturday, then he should come in for Dwayne Smith, who has made 93 runs in six innings in the tournament. Johnson Charles and Jonathan Carter had half-centuries against UAE and should keep their spots. The other decision West Indies will have to make is whether to play an all-pace attack, or pick Sulieman Benn instead of Kemar Roach, who has one wicket in three games and an economy of 6.81. Marlon Samuels wasn’t at training on the eve of the game but the West Indies management said that he had been given the day off because of a hectic schedule and is available for selection.

The forecast for Saturday is some cloud, some sun, and no chance of rain. Temperatures are expected to range between 19 and 14 degrees. There was not a blemish in the sky when the ball swung heaps for Southee against England, but there wasn’t as much assistance for the bowlers in the other two games at this venue. The pitch will be the same one on which South Africa made 341 before dismissing UAE for 195.

Since 2012, West Indies have won six ODIs against New Zealand and lost three.

McCullum averages 24 in six innings against West Indies over the last three years. Williamson’s average in eight innings is 29.

Gayle averages 55 and has a strike rate of 102 in his last five innings against New Zealand. Samuels averages 67 in his last four.

West Indies captain Jason Holder on whether he was able to give a percentage probability of Gayle playing.

“There is added pressure because it’s a knockout game, but the game doesn’t change because there is more on the line. We still need to play the attacking brand of cricket, it doesn’t guarantee us success but it gives us our greatest opportunity of being successful.”New Zealand captain Brendon McCullum