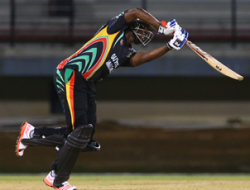 After all the talk off the field concerning the selection of the West Indies World Cup team, the attention finally moves to the field today, when the Nagico Super50 series bowls off in T&T with two matches.

Defending champion Barbados Pride will travel to Central Trinidad to do battle with the Combined Campuses and Colleges (CCC) in a match that will get off at 9 am. Later on in the day, the second match comes off and this will involve the Guyana Jaguars against the Windwards Volcanoes. This match will be played at the Queen’s Park Oval, Port-of-Spain, and will be a day/night affair. The first ball is timed to be delivered at 1.30 pm and tickets for the matches can be bought at the match venues.​

The Barbadians prevailed over hosts and long-standing regional sports rival, T&T, in the Grand Final at Queen’s Park Oval last year and this would be a feather in their caps, going into this year’s tournament.​

The title, their seventh in the regional One-day format (including one shared), would have been a source of great relief for the Pride, since their previous title was shared with Leeward Islands Hurricanes following a tied Grand Final five seasons ago.​

Barbados returns to the tournament as passionate about success as they were last season but recognises that it will be challenging due to the pressure of defending the title and the loss of a number of players that were key to their success last year because of West Indies international duty.​

The CCC has been known to upset the bigger named teams and Barbados will be fully aware of this. Their head coach the former Barbados player Floyd Reifer thinks his side is more in the tournament for development purposes. ​

“It is not about us trying to prove anything. Our role in this cricket is to develop players and in the last seven years we have developed a lot of players through the CCC programme. I could call a list of more than 20 players that have passed through the programme—some are playing for West Indies “A”, we have Chadwick Walton on the West Indies team and we have other players that have gone back to their territories and dominated the game there. ​

“So we have done well in terms of our role in development, in terms of young players in the Caribbean, but it’s sad we are not involved in the Four-Day Tournament because we have a lot of young talent this year and we are very excited about it. We have a good crop of young fast bowlers and batsmen, so we will be looking forward to the Nagico Super50 and allowing these young players to showcase their talents.”​

As the second most successful side in the history of the tournament, the last seven years without a title will feel almost like an eternity for Guyana Jaguars. However, table-topping performances in the WICB Professional Cricket League Regional Four-Day Tournament at the end of last year has prompted optimism that they could end the drought. ​

Coach Esaun Crandon said, “A lot of people may identify us as favourites. Obviously, we have got to back ourselves to win the tournament.”​

Windwards coach Ian Allen is also backing his team to do well.​

He said, “I think we have a good chance. We won it only two years ago, but we did not do too well last year and the players are conscious of it. They are working hard to improve upon that performance and get close to the level of confidence that will allow them to execute.”​