17th July 2022 Comments Off on Motie Shows His Mettle With Four-For In Losing Cause Views: 679 News

Motie Shows His Mettle With Four-For In Losing Cause 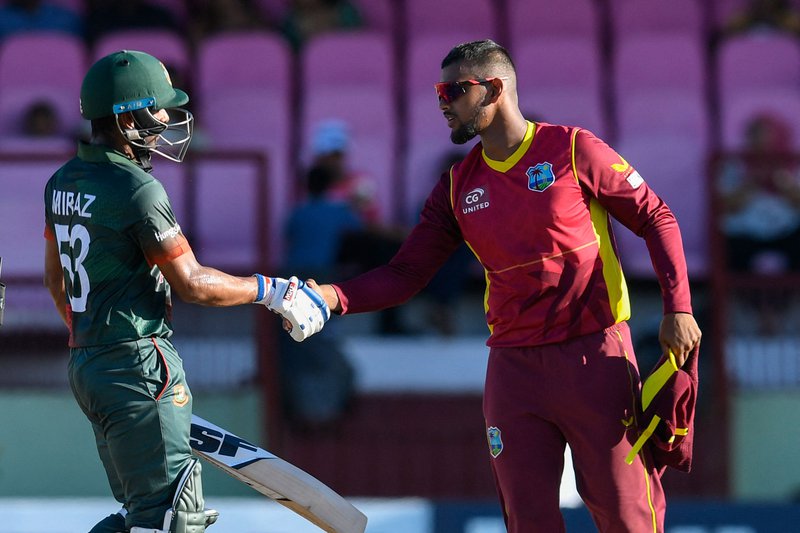 Gudakesh Motie stared with the ball on home soil, with an outstanding with a career-best 4-23 from ten overs of left-arm spin but the effort was not enough to stop Bangladesh winning for the third time in a row. West Indies suffered a 3-0 series defeat as the batsmen again failed to come to grips with the treat of the visiting spinners on Saturday.

Playing just his third ODI on home soil with family and friends in the crowd, Motie made his presence felt. Tamim Iqbal fell when he top-edged a sweep at Motie to fine leg in the 17th over to be taken by Akeal Hosein. Motie also held a caught and bowled to dismiss Liton Das and had Mahmudullah smartly stumped by Shai Hope. His fourth wicket came when he “castled” Afif Hossain with a perfectly pitched delivery.

Speaking after the match Pooran was disappointed with the overall result but praised the work on the field and the work ethic of Motie, who ended the three-match rubber as the team’s best bowler with six wicket at an impressive average of 13 runs per wicket.

“Motie was fantastic, not just this match but the entire series … his debut series on his home ground … and it was really good to see he got some reward today for the hard work he has been putting in. He has been consistent and that is what we have been asking for from our spinners for a long time. I’m happy for him now he has gotten this opportunity and has made the most of it.”

Earlier in the day, West Indies were bowled out for 178 all out in the penultimate over. Pooran played well for 73 off 109 balls while Keacy Carty, in his first match of the series, struck a patient 33 from 66 balls.

Taijul Islam also in his first match of the tour grabbed a superb career-best five-wicket haul to undermine the innings. The left-arm spinner finished with 5-28  and received great support from the new-ball pair of seamer Mustafizur Rahman (2-24) and left-arm spinner Nasum Ahmed (2-39).

MEET NEXT WEEK IN TRINIDAD

The “Summer of Cricket” will leave Guyana and head to Trinidad where West Indies’ next assignment will be against India, in the three-match CG United ODI Series. The first contest will be on Friday at the historic Queen’s Park Oval. First ball is 9:30am (8:30am Jamaica Time).

Fans can purchase their tickets at www.windiescricket.com/ticketsavoiding the need to queue or travel and to choose their preferred seat. The Windies Tickets service, presented by Mastercard, provides advance tickets for every West Indies home fixture, delivering tickets securely and directly to fans’ ticket accounts to store on their mobile devices or to print out for entry into to the venue.

Fans can also purchase tickets from box offices at Queen’s Park Oval and the Trinidad and Tobago Cricket Board (TTCB) headquarters at the National Cricket Centre, Couva from 10am to 4pm daily (excluding Sunday 17 July) leading up to each match day. Box offices will open two hours before the match start time on each match day. For all matches, adults can purchase half price tickets for children under the age of 16 and seniors can also benefit from half price tickets.

Fans can watch live on ESPN Caribbean and listen to live radio commentary on the Windies Cricket YouTube channel. For the first time, fans in India will be able to watch India against the West Indies on FanCode, India’s premier digital sports destination for all fans.