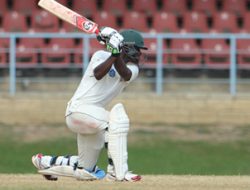 Milestones Aplenty In Run Feast Between Volcanoes And Scorpions;... 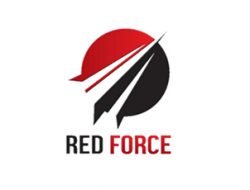 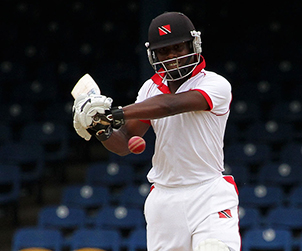 Mohammed, 34, anchored the Red Force second innings batting with a resolute, undefeated 113, and there were half-centuries from opener Kyle Hope and left-hander Akeal Hosein that extended the home team’s lead to 322 at the close on the third day of seventh round matches in the Championship.

At the same time, opener Montcin Hodge and left-hander Amir Jangoo missed out on hundreds and there was a half-century for their captain Jahmar Hamilton, and Leeward Islands Hurricanes had easily one of their best batting days for the season to condemn Guyana Jaguars to a long, hard grind.

And, the bowlers, led by Marquino Mindley of Jamaica Scorpions and fellow pacer Ryan John of Windward Islands Volcanoes, ruled the day with an astonishing 21 wickets tumbling before the Volcanoes ended the day needing 174 more to win with seven second innings wickets standing.

Led by 21 on first innings, the Red Force, led by Mohammed, buckled down and sternly resisted the Pride attack to fortify their hopes of avoiding a season sweep by the Championship leaders, prevent them from a sixth successive win and running away with the title.

Red Force were 79 for two when Mohammed came to the crease and the former captain batted the remainder of the day to help the hosts seize control from the visitors.

Barbadian Hope, one of the Red Force’s draft choices and the older brother of West Indies batsman Shai Hope, supported with 67 at the top of the order and Hosein, a former Pride player, made 55 just when it looked like the Pride were about to regain control later in the day.

Mohammed shared 45 with Hope for the third wicket, but it was his 86-run stand for the seventh wicket with Hosein that proved most valuable to Red Force, rallying them from 218 for six and frustrating the weary Pride late in the day.

Three wickets including Hosein – all to international off-spinner Ashley Nurse – inside the final hour put the brakes on the Red Force, but the Pride will now face a huge challenge to their inconsistent batting on the final day to either win or save the match.

Starting the day on 254 for nine, Pride were bowled out inside the first 15 minutes with Red Force pacer Anderson Phillip improving his career-best figures to 6-59 from 18.2 overs, taking the final wicket of Chemar Holder for a duck.

Mindley was the pick of the Scorpions bowlers with 4-48 from 18 overs and off-spinner Jamie Merchant ended with 3-36 from 20 overs, and the Volcanoes batting crumbled after they continued from their overnight total of 132 for two.

Hometown hero Devon Smith, the most prolific batsman in the domestic West Indies first-class competition, led the way with 72, spin bowling all-rounder Keron Cottoy was not out on 48 batting at seven and another hometown batsman, Andre Fletcher made 33.

Though Volcanoes lost their last eight wickets for 74, there was nothing to suggest that the Scorpions would fall for their third lowest total in the modern era of the domestic West Indies first-class competition (1966 onwards) in the next two hours.

None of the Scorpions batsmen reached 20 – and only Jamie Merchant and Mindley got into double figures – and the visitors were bowled out for their second lowest total against the Volcanoes.

Chasing 225 to win, Volcanoes suffered a huge and immediate setback to the run chase, when Mindley bowled Smith for a duck with the first ball of the innings.

Spinner Patrick Harty Jr added the scalps of West Indies Under-19 captain Kimani Melius lbw for 11 and Kavem Hodge stumped for 21 before the close to bring the Scorpions back into match.

Hodge led the way with 98, passing 4,000 career runs in the Championship, and Jangoo, the Hurricance draft choice from T&T, supported with 90 to give early signs that the Jaguars had a long, hard fight on their hands. (NOTE: Hodge now has 4,017 runs).

The pair extended their overnight third wicket partnership to a record 171, after the Hurricanes resumed from their bedtime total of 73 for two and chose discretion as the best part of valour.

The stand beat the Hurricanes’ previous best against these opponents of 100 between Junie Mitchum and Keith Arthurton 22 years ago at Webster Park in Anguilla.

Jangoo, former West Indies Under-19 World Cup-winning batsman Keacy Carty and Hodge, all fell for the addition of 55 in the space of 66 balls however, and Hurricanes were 266 for five in the afternoon session.

But Hamilton hit 67 and continued the solid batting, putting on 80 for the sixth wicket with Terrance Warde before they were both dismissed inside the final half-hour.

Th efforts of Hodge, Jangoo and Hamilton ensured the Hurricanes batted all day on the five-time defending champions, but they failed to secure a single batting bonus point. They were 244 for four at the 110-over, cut-off point, falling six runs short of the minimum two batting bonus points.

Left-arm spinner Veerasammy Permaul has been the most successful Jaguars bowlers with 3-91 from 42 overs – taking his tally of scalps to a season-leading 48 – and left-arm pacer Raymon Reifer took 2-67 from 24 overs.