Brooks To Replace Hetmyer In The West Indies Squad... Matthews On The Ball But New Zealand Take Series Lead

ST. JOHN’S, Antigua – Hayley Matthews topscored for the West Indies and then return to take four crucial wickets with the ball, but ended on the losing end as New Zealand secured a five-wicket victory in the third Women’s T20 International at the Sir Vivian Richards Stadium on Sunday afternoon.

Matthews produced a magical spell with her off-spin to have the visitors tottering on 20-4 as West Indies dominated the powerplay. She had a double wicket maiden in the fourth over when she removed White Ferns skipper Sophie Devine – leg before wicket for three; then rattled the stumps of Amelia Kerr two balls later.

Matthews also accounted for Georgia Plimmer’s wicket through a juggling catch from Chinelle Henry and earlier had Suzie Bates caught behind. Maddy Green continued her run of form for the series, playing a patient innings to get her team to victory. She made 49 not out off 45 balls with six boundaries. 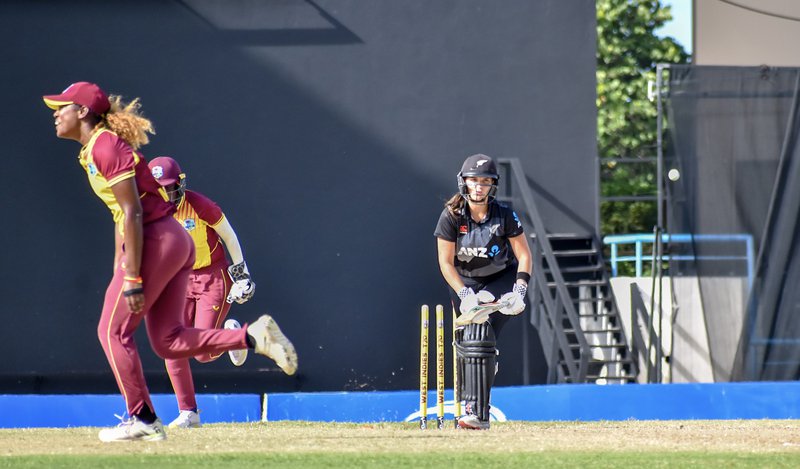 Earlier in the day, Matthews got the West Indies innings off to a flyer, smashing four boundaries on the way to 30 off 28 balls, but Fran Jonas deceived her with the left-arm spin and had her skying a comfortable catch to Bates. A 29-run partnership between Kyshona Knight (16) and Chinelle Henry (13) and some late fireworks from Shabika Gajnabi 19 – with a six and a four – saw the West Indies post 93-9 in 20 overs. Jonas was the pick of the New Zealand bowlers, finishing with figures of 4-1-16-3 followed by Bates with 3-0-5-2.

Speaking after the match, Matthews said:

“The pressure was on from the time we went out to bowl. I was focusing on hitting my areas, put my plans in and execute. Thankfully the wicket favoured spinners today. We didn’t have enough runs on the road and it’s something we have to seriously look at going into the last two T20Is. We need to have one of main batters batting deeper and accumulate more singles and better running between the wicket, especially through the middle overs.”

The teams will meet again on Wednesday 5 October for the fourth match also at the Sir Vivian Richards Stadium. First ball is at 10am Eastern Caribbean/9am Jamaica Time.