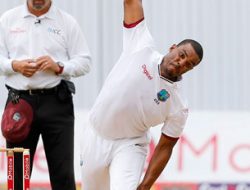 Set a meagre 88 for victory at the Arnos Vale Stadium, Barbados romped home in the 24th over with the right-handed Matthews carving out a delighful 56 not out.

At Sion Hill, former Windies captain Merissa Aguilleira played a key role as Trinidad and Tobago bounced back from their first round loss to inflict a six-wicket defeat on Guyana.

The right-handed Aguilleira controlled the defending champions’ run chase with an unbeaten 30 as they overhauled a paltry target of 83.

When T&T slumped to 41 for four in the 15th over, Aguilleira anchored a match-winning, unbroken fifth wicket stand of 43 with Felicia Walters (15 not out) to deny Guyana.

Caneisha Isaac had earlier taken four for 22 from eight overs to wreck Guyana for 83 all out off 42.4 overs.

She was supported by West Indies Women off-spinner Anisa Mohammed who collected three for 15.