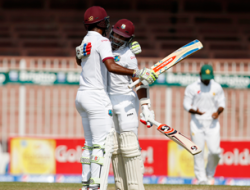 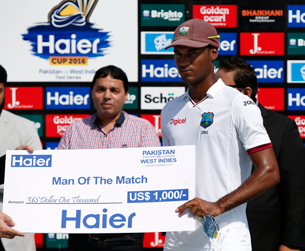 3rd November 2016 Comments Off on Match-winner Brathwaite hopes to repeat his feat ‘many times’ Views: 1406 News

It took 2028 Tests in the history of the game for an opening batsman to remain unbeaten in both the innings of the match and West Indies couldn’t have asked for a better result to go along with it, as Kraigg Brathwaite steered his team off all dangers to take them home against Pakistan in Sharjah. This is West Indies’ first overseas win – against a side ranked above them – since their 128-run win against South Africa in Port Elizabeth in 2007.

Brathwaite in the first innings, compiled a stodgy 142 in his typical patient manner, soaking in all the pressure around the middle-order batsmen, who either couldn’t get going or failed to convert a few starts. The opener helped his side post a slender lead, and in the hindsight now, managed to secure a very crucial cushion for the fourth-innings run chase.

Chasing 153 to win, Brathwaite carried on from his first innings exploits and held fort for the Windies while they kept losing a barrage of wickets. In a match winning 87-run partnership for the sixth-wicket with Shane Dowrich, both the batters remained unbeaten on 60 each to see the visitors prevail in what otherwise was headed towards a meek submission at one point.

Speaking after his first Test win as a captain, Jason Holder said, “We showed character and fight. Credit must go to Kraigg Brathwaite. He played an outstanding innings in the first innings and took responsibility of the chase in the second innings.” Despite the series loss, Holder looked to focus on the positive outcome of this game.

Brathwaite expressed satisfaction at his own performance that laid the foundation for West Indies’ victory but ensured he wasn’t getting too ahead of himself.

“This has been the best batting Test match so far of my career. I hope to repeat this feat many times in my career. I’ve had a good start. The key is to maintain it. I don’t want to get comfortable. I just want to continue working hard and score a lot of runs.” He emphasised on the need of staying aware about his own strengths and weaknesses, and backing his abilities. His plan of staying forward than back, to score runs on a low Sharjah wicket helped him.

The other vital cog in the run chase, Shane Dowrich was full of praise for the man of the match and said it helped to have Brathwaite as the anchorman at the crease, which allowed him to play more freely.