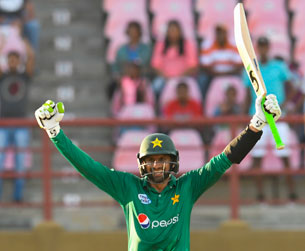 A commanding performance to secure a vice-like grip on eighth place doesn’t sound like an especially formidable achievement, but it was a much-needed boost off the back of a troubling few months for Pakistan cricket. A 113-run partnership between veterans Shoaib Malik – who reached his ninth ODI century with the six to seal victory – and Mohammad Hafeez enabled Pakistan to canter to a six-wicket win and clinch the three-match series 2-1.

Pakistan’s chase of 234 got off to an eventful start, with a first-ball wicket, a nasty collision between Ahmed Shehzad and Babar Azam, a dropped catch at mid-on and a brilliant grab by wicketkeeper Shai Hope all crammed into a lively first six overs. Babar edged Shannon Gabriel into his stumps less than three overs later, and the upshot from a frenetic opening Powerplay was Pakistan had lost three wickets for 45 and, for the umpteenth time, were looking wobbly.

The one positive Pakistan could glean from the situation was that Hafeez and Malik were at the crease together, and with 430 ODIs between them, they represented vast experience, if nothing else. It showed, too, with the pair ensuring they made survival their main priority for the next hour or so amid some testing spin bowling by Devendra Bishoo and Ashley Nurse, and they slowly began to turn the game in Pakistan’s favour.

By the time Hafeez holed out to deep square leg, the visitors needed less than 100 to win. Skipper Sarfraz Ahmed then joined Malik at the crease, the pair picking off the poor deliveries with consummate ease in a stroll towards their target. Towards the end, Malik was playing with such ease that he gave himself the chance of a century, which he completed in style with a straight six off Jason Holder. It might not always have been smooth sailing, but in the end, it was unquestionably clinical.

West Indies will rue a failure to take proper advantage of the review system for the second game running. When Hafeez was on 39, Nurse, arguably the most consistent performer for his side all series, spun one sharply back into him, the ball striking the top of his front pad. Hawk-Eye showed it would have been given out on review, but Holder decided against going to the third umpire. It was one among a series of errors West Indies committed in the field – dropped catches playing a starring role once again – and by the time Hafeez was finally dismissed, the telling blows had long since been struck.

West Indies had managed to scrap to 233 despite being squeezed for runs during much of the first half of their innings. Having slipped to 68 for 3 with a run rate well under four, Hope and Jason Mohammed combined for a 101-run partnership – the first three-figure partnership for West Indies this year – to set their team on course for what was at least a competitive total.

The heart of West Indies’ innings was stifled by a sustained spell of pressure from Pakistan’s spinners, a spell that, in hindsight proved decisive. Imad Wasim was the pick of the bowlers, bolstering his credentials as a genuine ODI allrounder following on from his impressive batting performance in the previous match. He was the major reason for West Indies’ sluggishness during the middle overs, consistently bowling on a good line and getting the ball to spin away from the right-handers. Hafeez provided him able support, and their combined bowling figures of 17-1-45-1 aptly told the story of the middle overs.

But even when their run rate slipped to as low as 3.34 runs per over, West Indies had one metric in their favour: seven wickets in hand. Inch by inch, Mohammed and Hope began to climb their way back into the contest, Mohammed launching Hasan Ali for sixes in consecutive overs and setting his team up for the final push.

However, just as the hosts looked like they were eyeing 250, Mohammad Amir and Junaid Khan took over from Shadab Khan, who had an indifferent day with the ball – despite picking up the wickets of Hope and Jonathan Carter – conceding 57 runs in his eight overs. The quality of Pakistan’s quicks shone through with a splendid bowling performance during the death overs, the two left-armers regularly landing yorkers with surgical precision that the batsmen struggled to get underneath. Only 29 runs came off the last five overs as the momentum West Indies had threatened to build up was punctured severely. Runs in short supply was a familiar theme for the hosts all evening, culminating in a result they – and their fans – have become all too familiar with of late.