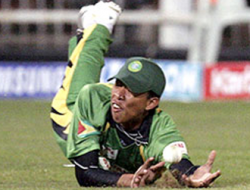 CAPE TOWN, South Africa—Chief selector Clive Lloyd has praised Kraigg Brathwaite’s maturity in the wake of the opener’s third Test century and says coupled with the presence of the experienced Marlon Samuels, West Indies were now only two middle order batsmen short of being a quality Test side.

Lloyd, the legendary former captain credited with moulding West Indies into a world class side of the 1970s and 80s, said the 22-year-old had shown he possessed the mettle for Test cricket.

“I think people will realise now that we do have young players who want to do well in Test cricket and not only thinking of T20,” Lloyd pointed out.

“He (Brathwaite) is very mature for his age and the innings I have seen him play against Bangladesh and now here shows that he’s getting better with every game.

“He’s a good thinker and you can tell from interviews, his answers are very intelligent so if we can continue with players of that nature that our team is not too far away from being a very good one.”

Samuels, Lloyd said, had also come into his own and the key was now to find two quality young players to complement the batting.

“I think we need another two batsmen in the middle there who can sort of fight through situations and give us a total for our bowlers to bowl to, and we’ll keep searching with the youngsters that we have and hope that they can come through.”

Both Brathwaite and Samuels proved their quality in the second Test at Port Elizabeth, stroking high class centuries in a record 176-run, third wicket stand to repel South Africa.

Their effort kept West Indies in the contest on the fourth day of the rain-affected encounter, before bad weather returned to force the abandonment of the final day.

“They both did very well. They were very mature,” Lloyd assessed.

“We had some very tight times when the bowlers were on top but they fought through it and it shows we have those skills and if we can continue in that vein, we can’t be too far away from building a proper team and a team that can compete with all nations.”

West Indies are down 1-0 in the three-Test series, following a heavy innings and 220-run defeat in the opening Test in Centurion. The result extended the Caribbean side’s dismal record on South African soil where they have never won a Test series and lost ten of 12 matches.

Despite the poor results, Lloyd remained upbeat about the Windies talent pool, and the side’s ability to find good players.

“You had (Kenroy) Peters who was home a week ago and he didn’t think he would be playing in a Test match but he’s here, done extremely well so we’re standing in good stead at the moment,” Lloyd said. (CMC)