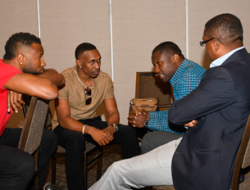 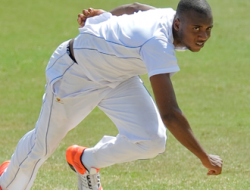 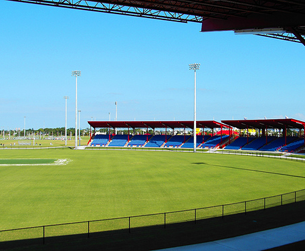 26th August 2016 Comments Off on Lauderhill gets ready to party even as poor weather looms Views: 1097 News

Lauderhill gets ready to party even as poor weather looms

If the Sachin Tendulkar-Shane Warne Cricket All-stars series last year was the trial run and the 2016 Caribbean Premier League in July the precursor, this here is the real deal. Two-time World Twenty20 champions West Indies take on the Indians, the most popular stars in world cricket and 2007 World T20 winners, for the first time in the land of Miami Heat at Central Broward Regional Park, Lauderhill, Florida.

Two T20 Internationals: The first on Saturday (August 27) and the second on the day after. The Indian cricket team may not be as well known as the Heat in this part of the world, but their sheer presence has sent waves of anticipation and excitement across the Indian diaspora from New Jersey to California.

Apart from minor changes in the International Cricket Council rankings table, these games lack context. Nevertheless, hotels and flights costing in the thousands have been booked; match tickets priced upwards of US$ 250 were sold out within the first few hours.

Although the ICC and the Board of Control for Cricket in India have said that this series will help expand the game in America, in the broader scheme of things, this is most likely a commercial enterprise – tapping into a new market, which could lead to good money for everyone. The TV rights alone have been sold for US$ 5.2 million to Star Sports and the start times have been adjusted to 10am local time to cater to the prime time Indian TV audience.

Central Broward Regional Park is by no means Sydney Cricket Ground or Kensington Oval, but it is an adequate ground with decent facilities with lots of room for improvement. There is no proper media box and if you are on the wrong side of the stands, the scorching Florida sun can give you a nice tan. Especially for those who decide to sit in the bleachers, they will really feel the heat over the weekend.

The New Zealand v Sri Lanka two-match T20I series held here in 2010 was the first international series played in the USA and that was a failure. The quality of the pitches was poor, only around 3000 people attended the games, and the vibe was just not there. However, two years later, when West Indies took on New Zealand, the matches were a huge hit with the presence of stars like Chris Gayle, Darren Sammy and Kieron Pollard attracting fans. The stadium was filled to capacity on both days and people actually scrambled for tickets. The lacklustre pitches had also improved and there was no lack of entertainment from the West Indians, who won both games by big margins.

This series, too, promises to provide some good entertainment as suggested by members of both the teams in the countdown to the weekend. India have flown in MS Dhoni, their superstar limited-overs captain, while much of the team that toured West Indies for the Test series has been retained. Jasprit Bumrah is the only other player drafted in specifically for this series.

The Indians will be a confident unit, having beaten West Indies in the Test series, and would want to avenge their semifinal defeat earlier this year at home in the World T20. Virat Kohli has been amongst the runs, R Ashwin is maturing into a fine allrounder, and the Indian pace bowlers have given the West Indians a lot of trouble.

West Indies, on the other hand, are the best T20 side in the world, but have sacked Sammy from the captaincy and have handed the leadership to Carlos Brathwaite, the man who sealed the deal for them in the World T20 2016 final when he launched Ben Stokes for four successive sixes at Eden Gardens.

Although the ICC and the BCCI have said that this series will help expand the game in America, in the broader scheme of things, this is most likely a commercial enterprise – tapping into a new market, which could lead to good money for everyone. The TV rights alone have been sold for US$ 5.2 million to Star Sports and the start times have been adjusted to 10am local time to cater to the prime time Indian TV audience.

The nucleus of the World T20-winning team remains in place, but, apart from Brathwaite, Jason Holder and Marlon Samuels, the other members of the squad have not played any major cricket since the CPL that concluded early August. Those three were in the side that lost 2-0 in the four-Test series against India recently. However, West Indies should feel optimistic since they have the men who have already played in this venue and have done excellently in most parts of the world in the format. In addition, the boundaries are rather short here, and that alone should give them a huge boost.

The crowd will be overwhelmingly Indian, but watch out for the Guyanese and Jamaican expatriates, who are likely to come in numbers as well.

On the weather front, there is some threat of scattered thundershowers over the weekend and there is a tropical disturbance brewing in the Atlantic. For the sake of the paying public, let’s hope those just stay away.

All of that, however, will hopefully become secondary come Saturday and Sunday. The music will be blaring, the drinks will be flowing, the cricket ball will be flying all over Central Broward Regional Park and the stage would have been set at one of America’s greatest party cities for what would be just the start of what one feels could continue for years to come.