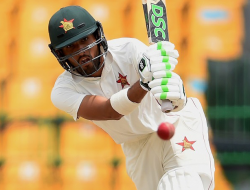 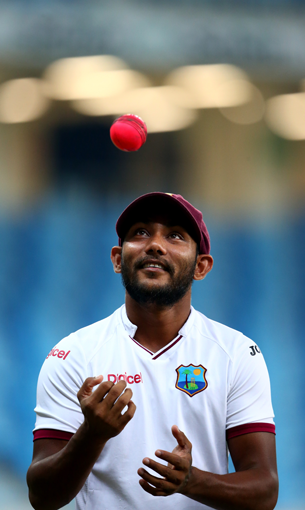 ‘Knew I have a big part to play’ – Bishoo

After a quiet tour of England, Devendra Bishoo revelled in the added responsibility of spearheading West Indies’ attack with nine wickets in their 117-run win over Zimbabwe in the first Test at Queens Sports Club. Bishoo bowled just 42 overs across two Tests in England. Against Zimbabwe, he bowled 56 overs, and wrapped up the match with 4 for 105 on day four to win the Player-of-the-Match award.

“After the first day, after seeing how Zimbabwe bowled, I knew I would have a big part to play in the Test match,” Bishoo said. “But it was important to be patient on this pitch, and stick to a plan.”

Bishoo was made to work a little harder for his wickets in the second innings, with openers Hamilton Masakadza and Solomon Mire putting on a 99-run stand, and most of the top order displaying a willingness to put him off his lines with the sweep shot. Despite the added pressure from the batsmen, Bishoo stuck to the plan and wickets were the reward. “I don’t think that [batsmen using the sweep] changed my gameplan in any way,” he said. “As long as you have a plan and you stick to it, the wickets are going to come.”

Bishoo insisted that West Indies were confident of batting themselves back into the game in the second innings even after being bowled out for 219 in the first innings. “Yeah, we know the capability of batsmen in our team,” he said. “We have Kraigg Brathwaite, who had a good series in England, Shai Hope had a good series in England, Roston Chase with runs in his last game against Zimbabwe A. Everyone believed in one another, and that’s one of the most important things about this group.

“The team togetherness is very good. We’re very comfortable each other, we believe in each other, and I have no complaints.”

In conditions very different from those faced in England, Bishoo found himself bowling with both the old and the new-ish ball, which presented its own challenges on a sluggish Queens Sports Club track.

“As the ball got older, it was a bit harder to bowl with. As the shine came off it, it would spin, but spin slowly. It was a little bit more tough. From the 65th to 70th over onwards, it didn’t spin as much, and when it did it was with much less pace.”

His bowling aside, Bishoo also had a job to do with the bat in this Test. He missed out on his maiden Test fifty, but added an invaluable 92 runs with Chase. “I knew that putting on a partnership with Roston would be very important,” he said. “I was disappointed to get out short of the fifty, but happy to have played a supporting role.”