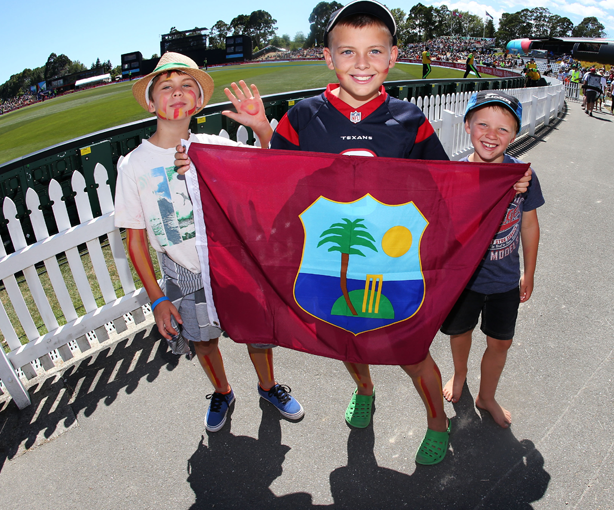 Joe Burns and Usman Khawaja adjusted from Twenty20 to Test match gears with all the smoothness of a well calibrated sports car, as Australia’s top order put their stamp on Boxing Day despite a well grassed pitch and a slightly improved West Indies.

Both Burns and Khawaja had turned out for their BBL clubs in the gap between Tests, but it was the unsigned and rested David Warner who let adrenaline get the better of him in an early flurry that ended with his wicket after Jason Holder sent the Australians in to bat.

The vast majority of a day delayed by an hour due to considerable morning rain was then taken up by a union that reaped 258 runs and centuries to Burns then Khawaja, who joyfully passed their milestones in the space of three deliveries after tea. Burns was ultimately out stumped at the hands of Kraigg Brathwaite, and Khawaja glanced Jerome Taylor into Denesh Ramdin’s gloves before the close.

Their exits should not detract from the ruthlessness shown by Burns and Khawaja, two members of the Boxing Day selection triangle that ultimately cost Shaun Marsh his place. Burns showed excellent judgment around off stump while finding the boundary 17 times. Khawaja carried on with the rich vein of form and confidence that began at the Gabba against New Zealand: few batsmen in the world are capable of making the game look quite as simple as he does at his best.

Australia’s batsmen were aided by another disappointingly muted display from the West Indies bowlers, who conceded runs at a lesser rate than they had done in Hobart but were nonetheless unable to create sustained pressure on the batsmen. The debutant Carlos Brathwaite was at one point reduced to bowling well outside off stump to a 7-2 field, a gambit the umpire Marais Erasmus opposed by calling a pair of disapproving wides.

The tourists’ fielding was also indifferent – one Khawaja flick through the leg side was chased so languidly by Jerome Taylor that the batsmen might easily have run five. Later Marlon Samuels, who had juggled Warner’s skier, turfed a ball Khawaja struck more or less straight to him at cover. Melbourne’s smallest Boxing Day crowd since 1999 expressed appropriate disbelief.

Holder had expressed hope that his pacemen would be able to exploit the moisture evident in the pitch after rain delayed the start by an hour. But they were stunned by Warner’s early salvo, striking five boundaries in the second and third overs of the day as 27 were heaped in the first three.

Having stated his desire to make a century on Boxing Day – the MCG is the only Australian Test ground where he is yet to pass three figures – Warner was flushed with adrenaline, and overreached to his 12th ball when he tried to pull Taylor over midwicket and skied to Samuels at cover.

This episode had been manic, and Khawaja’s arrival signalled something more orthodox as he tried to find his rhythm after playing only one BBL match for the Sydney Thunder on his way back to fitness following a hamstring strain. Not quite as initially fluent as he had been when making hundreds in Brisbane and Perth, Khawaja slowly found his range, while Burns looked safe at the other end having been retained in a decision that showed the selectors’ faith in him.

The scoring rate built up once more as lunch neared, with Carlos Brathwaite, included for the injured Shannon Gabriel, going for 11 runs in his first two overs. Kemar Roach extracted one edge from Burns as the interval near, but it fell short of the slips cordon. Few such moments could be found in the afternoon, as Khawaja and Burns accumulated steadily while the MCG crowd swelled nearer to the gathering of around 50,000 hoped for by the MCC. Even so, 53,389 was the smallest Boxing Day attendance in at least a decade.

They were witness to some attractive batting but also an assortment of bowling and fielding that veered from mediocre to awful. Holder’s control of proceedings was loose at times, his fields invariably defensive due to inconsistent bowling, and his choices of bowlers also odd – having exploited some moisture on the first morning in Hobart to gain useful spin, Jomel Warrican was unused this time until the day’s 42nd over, by which time there was precious little purchase for his slow left-arm.

The evening session’s highlight was undoubtedly Burns and Khawaja passing three figures in the same Warrican over. It was otherwise something of a slog as the batsmen accumulated soundly while Holder tried with some success to limit the flow of boundaries. Khawaja was to reach or clear the rope seven times in his 144, a testament to his strike rotation but also the freely available diet of singles.

There was a hint of tiredness in the dismissals of both Burns, advancing at Brathwaite but misjudging a ball fired flatter and wider, and a leg-glancing Khawaja. Their graft had left the match and series firmly in Australia’s lap, with the captain Steven Smith and the Hobart double centurion Adam Voges there at the close.