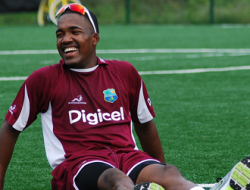 Samuels, who was left out of a Jamaica provisional 13-man squad which was named last Thursday for the team’s first game against Windward Islands Volcanoes, beginning on Friday at Sabina Park, is to have violated section 1.1 of the JCA’s selection policy criteria.

“He (Samuels) is not qualified to represent Jamaica in the upcoming regional first-class tournament,” JCA Chief Executive Officer Courtney Francis told The Gleaner.

“This is on the basis that he is in breach of the JCA’s selection policy. He (Samuels) needs to play 80 per cent or more national competitions, or otherwise give an acceptable reason for his absence.

“This includes if he is on West Indies duties, or provide evidence that he is injured and cannot take part in national competitions. He got dropped for the New Zealand and Bangladesh series and was supposed to turn out for Melbourne during the (two-day) Senior Cup and he did not.”

Section 1.1 of the selection policy states that: “As part of the JCA’s commitment to Regional and International cricket, the player must participate in local cricket when not representing Jamaica, the West Indies or any other competition sanctioned by the JCA, the WICB, or, the ICC.”

The section, which has been in existence for close to two years, also goes on to add: “The quality of local tournaments is enhanced by the participation of the best players from the clubs and parish associations, and, therefore, it is imperative that they make themselves available for selection for the duration of the tournament/competition/series.”

“Only in, exceptional circumstances, should the JCA excuse a player from participating in a local tournament,” the section reads.

The exclusion of Samuels, who scored two centuries in three matches for the West Indies one-day team before their abandoned tour of India last month, is expected to leave a void in Jamaica’s batting.

Samuels is not the only Windies player who is not contracted otherwise, who was not named in the squad, which was named following Jamaica’s fifth and final trial match last Thursday and was to be ratified by the JCA at the weekend.

Fast bowler Jerome Taylor has also not been selected and according to Francis, Taylor, who was also a part of the ill-fated tour of India, requested time off to deal with some personal matters.

“He (Taylor) has asked the JCA for some time off to take care of some personal matters and it was granted. He is expected to turn out for training next Friday, which means that he is set to miss the team’s second game away to Barbados next weekend as well,” said Francis.