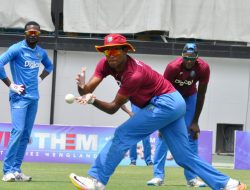 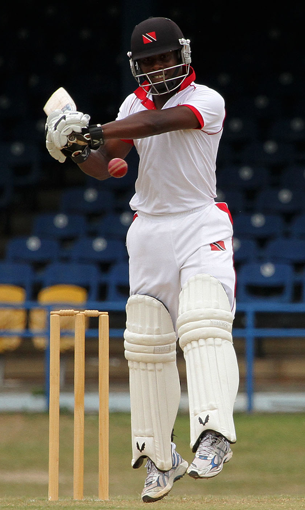 WEST Indies middle-order batsman Jason Mohammed is eyeing his first Test call-up, after another impressive series that saw the right-hander score two half-centuries against Pakistan in the recently concluded three-match 50-over series.
Mohammed has played eight One Day International matches for West Indies, scoring 289 runs at an average of 41.28. He has cracked four half-centuries this year with a highest score of 91 not out against Pakistan last Friday, to lead the regional team to victory in the first ODI.
Mohammed has jumped 86 places on the world ODI rankings, after scoring two fifties against England in March and two more versus Pakistan over the past month.
Mohammed, speaking to Newsday yesterday, said he would welcome the opportunity to play the longest version of the game.
“I guess we have to wait and see. Obviously I would like to play Tests, but it is up to the selectors.
“I think with my good form I should have a chance in Test cricket. If there are others in line, obviously I will have to wait my turn, but I am definitely excited if I am called up to the Test time, and I would be looking forward to the opportunity,” he said.
Mohammed believes his inclusion on the Test team can assist the West Indies, but knows the transition to Test cricket will come with challenges.
“I think I will help a little bit, but myself going into Test cricket for the first time it will be difficult.
“There are guys who have played before who will be there, so obviously with a mixture of experienced guys and myself, it could be a good combination.
“It would be my first time playing Test cricket and I just have to wait and see how it goes,” he said.
The Trinidad and Tobago cricketer said he will continue pushing to play all formats despite admitting he favours the 50 overs game.
“The selectors have their own options on who they are looking at, to play what format. In the past I think I have deserved a (Test) spot but was never given the opportunity, but I am still pressing and hoping to play Test cricket sometime soon.”
Mohammed, who was out of West Indies colours for a long time after making his debut in 2011, said: “It was good coming back into the international scene, it is always good to perform and I worked hard leading up to those series (England and Pakistan); and even before that, so it is nice to have the results behind me.”
Mohammed’s prowess could not lead West Indies to a series win against Pakistan, as the regional team lost the series 2-1.
“It was disappointing that we did not win the series, but I think more consistent cricket in both bowling and batting would have gotten us over the line. I think that was the main thing. We were not as consistent as we should have been over the series.”
Mohammed has been on a stellar run of form since the 2016 Caribbean Premier League and is aiming for more production.
“It’s been a really good run for me for the last couple of months to a year.
“Since CPL, I have worked really hard in all three departments of my game and it has been really good.
“Hopefully I can keep it going for as long as possible.”