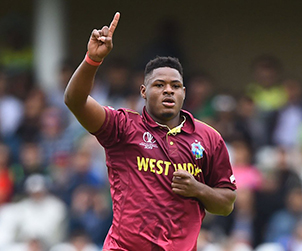 NOTTINGHAM, England – West Indies captain Jason Holder spoke to members of the media after his team’s superb win by seven wickets over Pakistan in the opening match of the ICC Cricket Word Cup. After Holder won the toss and decided to field, Oshane Thomas bowled with pace and aggression to showcase what he’s capable of on his first outing on the Cricket World Cup stage. The well-built six-footer took 4-27 as the Pakistanis were bowled out for just 105 off 21.4 overs at Trent Bridge. West Indies then sped to 108-3 off 13 overs – led by Chris Gayle’s awesome power as he smashed his 52nd half-century  in front an appreciative crowd.

Thomas earned the Player-of-the-Match award and was presented with his trophy by the great Sir Vivian Richards. With today’s heroics, the 22-year-old has now captured nine wickets for 48 runs in his last two ODIs – following up on his career-best 5-21 when he bowled out England for 113 in Saint Lucia in March. He was well supported by Holder (3-42) and Andre Russell (2-4) – as they made use of the short ball on a helpful surface. Thomas’s first wicket came via a superb diving effort by keeper Shai Hope – who ended with four catches.

“This is a really good start, I thought we bowled really well. We got wickets with the new ball and really set them back, slowed their momentum and quite fortunate for us we were able to keep picking wickets up. They never recovered from the position they were in at the beginning. I think when we batted it was a clinical performance as well, obviously started nicely by Chris. He put the accelerator on them and was supported by Pooran at the end,” Holder said.

“We want to remain aggressive and that’s through good fast bowling. Our style is to be aggressive, whoever we are playing against. If you aren’t picking up wickets then you are never going to contain teams. It’s good to see a lot of short balls and the discipline and aggression we showed was great. We stacked the overs nicely together and really built the pressure on them. If we feel a batsman is susceptible to a short ball then it will be an option we will use.”

Holder added: “I wanted to bat second, I always back us chasing with a deep batting line up we have. Oshane was excellent. It’s great to see him in running in and bowling fast. We just have to stay consistent and not get carried way. He’s been outstanding and that creates a buzz throughout the entire team. It was a great start and while we bowled really well, it was a very clinical performance with the bat too.”

In the second half of the match, Gayle motored to an even 50 off just 34 balls as the West Indies won with 218 balls to spare. Playing his 290th ODI, the 39-year-old registered his fifth consecutive score of 50 or more to follow up knocks of: 135, 50, 162 and 77 against England in the Caribbean earlier this year. The powerful left-hander cleared the ropes three times which took him to 40 sixes, the most by any batsman in Cricket World Cup history. Nicholas Pooran, the 23-year-old left-hander in his second ODI match, also batted brilliantly to end on 34 not out – which included a massive six over deep midwicket to seal the triumph.

West Indies will remain in Nottingham for their second match against Australia next Thursday. First ball is 10:30am (5:30am Eastern Caribbean Time/4:30am Jamaica Time).