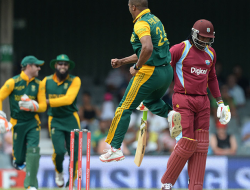 PORT OF SPAIN, Trinidad, (CMC):Both Jamaica Franchise and Guyana Jaguars will have added motivation to win when they clash in the first semi-final of the NAGICO Super50 today.

Last year, both teams were good enough to reach the final four of the competition but crashed out as Barbados went on to clinch the title by beating hosts Trinidad and Tobago in the final.

With the disappointment still fresh in their minds, Jamaica are champing at the bit as they chase a spot in Sunday’s final.

“We made the semi-finals last year but didn’t put up a good showing, so we’re looking to go one better,” captain Nikita Miller said.

“I think this year it is less in terms of pressure as we have a lot of debutants in the team, and I don’t think there is a lot of pressure on them to do well really.

“We are in a rebuilding process where we are trying to find a good set of young guys to fill the void of the older guys, who are getting ready to move on, so it’s a lot less pressure this year.”

Jamaica finished second in Group B on 10 points, behind T&T Red Force who played unbeaten to top the group.

They beat Leeward Islands convincingly by nine wickets in their opening game, went down to T&T by 17 runs in their second match but made sure of their semi-final spot by beating West Indies Under-19s by nine wickets on Tuesday.

And though Miller believes Jamaica are playing the better cricket at the moment, he said his side would be taking little for granted against the Jaguars.

“Guyana’s team is always there or thereabouts, in the semi-finals or the finals. They are a lot more experienced than we are, but I think we are playing more consistent than they are at this moment,” he pointed out.

“But they are a very experienced team, they have the know-how at this stage which we don’t have or have less of. But it’s a semi-final, it’s a high intensity game and I’m sure both teams are looking forward to this game and are up for it.”

Meanwhile, Miller’s opposite number, Christopher Barnwell, believes that Guyana are much better prepared this year to reach the final.

“It’s very important for us to reach the final. We’ve got to come out and play good cricket tomorrow,” he stressed.

“We were in the semi-finals last year and were beaten by Barbados, so hopefully we can go out there and play some good cricket. Last year was an unfortunate situation where a couple of our guys were under illness, so we couldn’t field our best team.

Guyana finished top of Group A, winning their first two matches against Windward Islands Volcanoes and Bar-bados Pride, before going down to Combined Campuses and Colleges Marooners in a dramatic finish.

“Guyana and Jamaica are always playing some very good cricket games, especially stages, so it’s important for us to go out there and whatever we do first, put up a good total or restrict them, we need to perform well,” Barnwell pointed out.