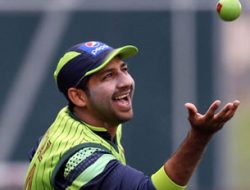 BRIDGETOWN, Barbados (CMC) — Guyana Jaguars have opened up a considerable lead at the top of the Regional four-day championship standings, following their comprehensive 10-wicket win over Trinidad and Tobago Red Force in the seventh round which wrapped up Monday.

The two-time defending champion are well placed on 103.2 points, almost 16 points clear of Barbados Pride who they will meet in the eighth round of the competition starting at Kensington Oval on Thursday.

Jaguars have now won two on the trot since the resumption of the tournament earlier this month and will be favoured — with three games remaining — to make it a hat-trick of titles.

Pride, meanwhile, lie second on 87.4 points, following their nine-wicket crushing of Windward Islands Volcanoes inside three days at the Oval — also their second in as many games.

They are just under 10 points ahead of previous leaders Jamaica Scorpions but victory against Jaguars could see them possibly leapfrog to the top.

Scorpions, who led at the mid-season break for the Regional Super50, have now lost two straight to slide to third on 78.6 points.

Their most recent defeat — a 34-run loss to Leeward Islands Hurricanes at Sabina Park — was a major setback especially with difficult away trips for their last three games of the competition.

Hurricanes, meanwhile, rallied their season with the seventh round win over Scorpions and now lie fourth on 63 points while Red Force have lost one of two since the mid-season break and are fifth on 58.4 points.

Volcanoes are rock bottom on 53.4 points after losing their last two heavily.

In the next round, Volcanoes clash with Hurricanes at Warner Park while Red Force take on Scorpions at Queen’s Park Oval.