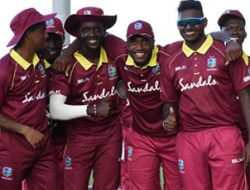 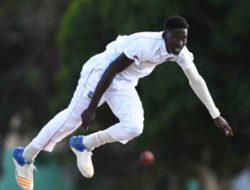 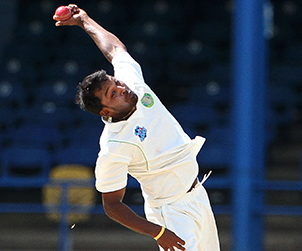 Smith and Permaul shared nine wickets and bowled hosts Jaguars to a 225-run, first innings lead over current leaders Red Force on the second day of third round matches in the Championship.

Smith, 24, the son of former Guyana coach Albert Smith, grabbed a remarkable 5-12 from eight overs for his second haul of five wickets or more in only his third match, and Permaul supported with 4-29 from 13 overs.

Opener Jeremy Solozano had the top score of 27 and Kjorn Ottley, batting at seven, made 22, but no other frontline batsman made it into double figures.

Left-handed openers Tagenarine Chanderpaul, not out on 29 not out, and Chandrapaul Hemraj, not out on 22, saw off the Red Force new-ball threat before the close to extend the Jaguars’ lead to 278.

Earlier, Jaguars were dismissed inside the final hour before lunch, after they continued from their overnight total of 263 for six.

Anthony Bramble added 28 to his overnight score before he was dismissed for the Jaguars’ innings top score of 91.

He extended his seventh-wicket stand with Devendra Bishoo to 45 before he fell to Terrance Hinds to become the day’s first wicket.

Dowrich has so far led the way with 73 and Mayers hit 53 – his second half-century of the match – to put Pride in a dominant position with a lead of 260 over the Scorpions.

The pair shared 112 for the fifth wicket to lift the Pride from a wobbly 58 for four before left-arm spinner Patrick Harty pouched both in the last half-hour prior to the close.

Grenada-born wicketkeeper/batsman Denis Smith had earlier scored 35 to help the Scorpions recover from their overnight total of 53 for six before they were bowled out in the last hour before lunch.

Derval Green made 25 and with Smith posted a valuable 49 for the seventh wicket to keep Pride without immediate success inside the first hour.

But once Green fell, there was token resistance from the rest of the batting with the last three wickets tumbling for 36 in the space of 78 balls with Keon Harding and fellow pacer Kemar Roach, the West Indies fast bowler, sharing three of the wickets.

Pacer Nicholson Gordon with 3-27 from 12 overs then crippled the Pride top order before Dowrich and Mayers rescued the visitors.

Volcanoes 98-6 vs Hurricanes at the Daren Sammy Cricket Ground in Gros-Islet, St. Lucia

Only 44 overs of play were possible, but Hurricanes made hay, after the first day of the contest was lost to rain and the weather delayed the start for a second day.

Berridge ended the truncated day with 4-21 from 14 overs and West Indies pacer Alzarri Joseph took 2-31 from 15 overs to carve up the Volcanoes top-order batting in the day/night contest.

Berridge and Joseph each bagged a pair of early scalps and Volcanoes were wobbling on 28 for four inside the first 11 overs of play, after they were sent into bat.

Long-serving opener Devon Smith was not out on 37 and Alick Athanaze made 23 to get things moving for the Volcanoes with a stand of 48 for the fifth wicket before Berridge struck twice to tighten the visitors’ grip.