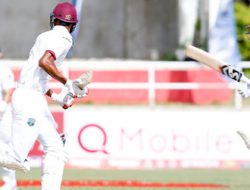 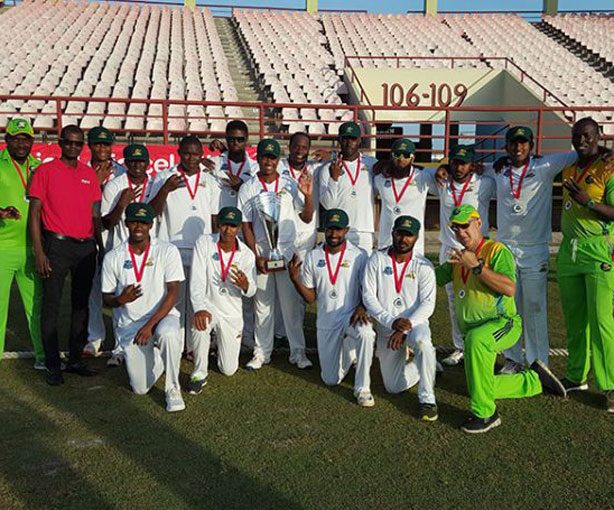 THE Guyana Jaguars plummeted in dramatic fashion to a humiliating 10-wicket defeat against the Leeward Islands Hurricanes inside three days in the final match of the West Indies Cricket Board’s Professional Cricket League (PCL) four-day game at the Guyana National Stadium, Providence yesterday.
However, Sunday’s defeat did not stop the Jaguars from being crowned Regional four-day champions for a third straight year.
A complete bowling effort from the Hurricanes led to the demolition as the Jaguars were all out for 143 in their second innings.
Faced with a first innings deficit of 119, only a handful of the Jaguars batsmen got starts, but no one carried on – Chanderpaul Hemraj’s 29 was the top score, while Keemo Paul (26), Anthony Bramble (23) and Veerasammy Permaul (20), were the other batsmen with any meaningful contributions.
Pacer Gavin Tonge bagged 3-33, while off-spinner Rakheem Cornwall (3-68), Jeremiah Louis (2-16) and debutant left-arm spinner Elvin Berridge (1-12), completed the destruction mid-way through the final session. Cornwall was adjudged man-of-the-match after ending with match figures of 9-136.
Set 25 runs to win, the visitors’ openers Montcin Hodge and Chesney Hughes overhauled the winning target without much trouble.

Resuming at 255-7, Louis began the day with attacking intent, dispatching pace bowler Raymond Reifer to the square-leg fence before cutting him for a square boundary.However,he was soon after trapped leg before wicket from a lovely trademark inswinger from the pacer, which brought an end to his attractive innings.
That dismissal did not only brought about the end of the brisk 68-run eight-wicket stand, which began late on day two but also completed Reifer’s third five-wicket haul.
Jacques Taylor added 12 runs to his overnight 60 before Reifer completed an excellent innings figures of 6-75 when he had the right-hander caught behind. Taylor struck ten fours and a six off 160 balls and batted for 217 minutes.
Tonge struck three fours in his unbeaten 17 before Permaul took the final wicket.
The start to the third innings was superb for the tourists as Tonge got a wicket in the third over when Assad Fudadin edged a nearly unplayable delivery to wicketkeeper Jahmar Hamilton.
Hemraj joined Bhaskar Yadram and the duo survived a tricky period until the last over before lunch when Yadram fell into a trap, edging a sharp turning delivery from Berridge straight into the hands of Cornwall at first slip.
After the interval Hemraj and skipper Leon Johnson came together to prop up the innings in a 34-run, third-wicket partnership but things fell apart afterward.
Johnson was taken at extra-cover off Tonge, while Hemraj misjudged the line, shouldered arms and had his off stump rattled off the bowling of Louis.
At that stage the hosts’ were a fair distance from the deficit and were heavily dependent on Reifer and Bramble, but to compound the hosts’ woes,Reifer was run out in a dreadful mid-pitch mix-up after the pair was undecided about a second run.
Paul and Bramble batted safely to tea, at 93-5. However, the hosts lost Bramble in the session’s third over when he offered a simple return catch to Tonge, while Steven Jacobs made little impression before he was removed by Cornwall.
The eight-wicket stand between Paul and Permaul then cancelled out the tourist’s lead before Cornwall and Louis claimed the final three wickets in quick succession.
Despite the defeat, the hosts claimed their third straight Regional four-day title.