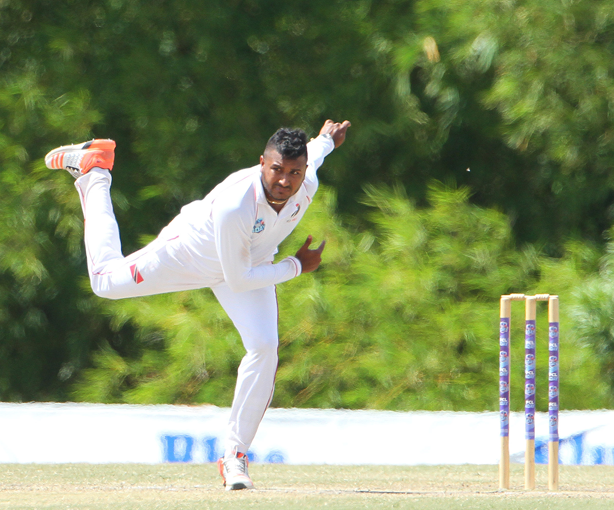 West Indies A’s bowlers combined to pick up a 165-run win in the first unofficial ODI against Sri Lanka A in Dambulla. The win was set up by their new-ball pair of Ronsford Beaton and Delorn Johnson, whose early strikes broke the back of Sri Lanka’s chase of 268. Offspinner Jon-Russ Jaggesar then accelerated Sri Lanka A’s slide with wickets of the middle and lower order; he finished with career-best figures of 4 for 29 as Sri Lanka A were bowled out for 102.

After electing to bat, West Indies A compiled 267 over two days, as rain intervened to push the match into a reserve day, just 12.5 overs into the innings. The innings was built around three important contributions. Opening batsman Kyle Hope set up the platform by holding his end amid frequent strikes. He top-scored with 81. West Indies A captain Jason Mohammed and Rovman Powell provided the late thrust with half-centuries.

West Indies A began the reserve day on 69 for 2. Hope resumed on 28, with Andre Fletcher, on 7, for company. The two added another 42 for the third wicket, before Fletcher fell to the left-arm spin of Milinda Siriwardana. Hope added 63 with Mohammed for the fourth wicket before being bowled by Amila Aponso, the left-arm spinner. By that time, he had got to his second half-century and his List A career-best score. Powell then joined Mohammed and slammed 55 off just 35 balls, hitting three fours and as many sixes. Both Mohammed and Powell fell in the last over, but their efforts had helped West Indies A slap 93 in the last 10 overs.

Beaton and Johnson took the first four wickets within seven overs of the chase to leave Sri Lanka A reeling at 26 for 4. Jaggesar entered the wickets column when he broke a 23-run fifth-wicket stand – the highest Sri Lanka A could put together – by dismissing Minod Bhanuka. He added the scalps of Chartih Aslanka and Dasun Shanaka to his name as the slide continued. Shehan Jayasuriya top-scored with 24 at No. 8, but that was of little significance to the result.

Beaton finished with 3 for 26 in 6.3 overs – his best in List A – and Johnson finished with 2 for 19 in four overs. The second match takes place in Kurunegala on Thursday, before the series concludes with the third and final game on Sunday in Colombo.