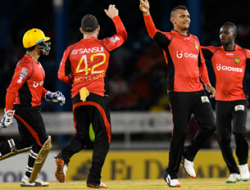 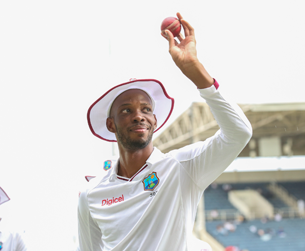 In the gloom, Chase lights the way with 5-wicket haul

Though West Indies are staring defeat in the face heading into today’s fourth and penultimate day of the second Test at Sabina Park, all-rounder Roston Chase had reason to be pleased after a maiden five-wicket haul yesterday.

The tall off-spinner, playing his second Test, was West Indies’ main bowling threat as India declared on 500-9 in reply to 196.

He troubled India’s batsmen to snare 5-121 after a marathon 36 overs and one ball.

“It’s a great feeling to get five wickets in any match, but at Test match level it’s an even better feeling for me. Seeing that I just started my career it’s a big confidence booster for me,” Chase told reporters at yesterday’s press conference after a rain-truncated third day’s play.

The Barbadian outshone his more illustrious teammate Devendra Bishoo with the leg spinner struggling for accuracy.

The five-wicket haul was also a significant achievement since the talented India batting line-up is particularly revered for its strength against slow bowling.

Though aided more by the Sabina Park surface, Chase said he learned from the first Test at the Sir Vivian Richards Stadium in Antigua. There he felt he was not direct enough and did not use sufficient variation to keep the batsmen guessing.

“It’s Test cricket so I never thought it would be easy. Learning from the first game I thought that my line was a bit too wide. I adjusted my line for this match and attacked the batsmen and that worked for me.

“I’m six foot four [inches tall], so I tend to get bounce, but I wasn’t only getting bounce I was getting turn as well. That helped me a little bit. I was straightening some balls and spinning some as well. I also tried to vary my pace a lot more this game. Last match I found that I was a little too quick,” he explained.

Chase remained hopeful that the West Indies can pull off an unlikely draw if they can play as a unit.

“We’re a bit behind the eighth ball, but I believe once the team comes together…that we have the ability to compete at this level. We just need to string [performances together] a bit more so we can have a better collective effort,” said the all-rounder.