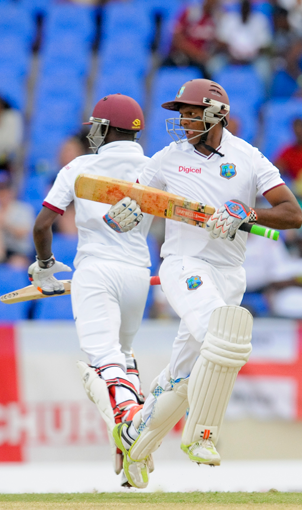 West Indies fought back to limit England’s advantage on the second day of the first Test in Antigua.

The tourists lost their last five wickets for 42 runs as they were bowled out for 399, with Ben Stokes falling for 79 and Kemar Roach taking 4-94.
Although West Indies slipped to 99-4 in reply, they recovered to reach 155 without further loss by the close.

Anderson claimed his 381st Test wicket to move to within two of Ian Botham’s record for England.

England’s immediate objective on the third day will be to remove the obdurate Shivnarine Chanderpaul, who made an unbeaten 29 off 98 balls in his 162nd Test.

He and Jermaine Blackwood spent almost 29 overs adding 56 in the evening session, a partnership typical of a game which has been attritional rather than enthralling.

England can still claim to hold the upper hand in their first game since their dismal World Cup campaign, and captain Alastair Cook will be pleased by the discipline shown by his bowlers under clear skies and on a largely placid surface.

But they were left to reflect on the no-ball that cost Ben Stokes the wicket of Blackwood, who edged to Cook at slip on 21. It would have reduced West Indies to 133-5.

“It’s not a wicket that you can run through a team on,” said Chris Jordan. “You just have to hang in and be patient.”

Stokes was the only member of England’s five-strong attack who failed to take a wicket, off-spinner James Tredwell the most economical of them with 1-22 off 15 overs.

Anderson, playing his 100th Test, looked the most penetrative, angling one across the left-handed Devon Smith in the ninth over of West Indies’ reply to provide Jos Buttler with the first of three catches.

Darren Bravo failed to withdraw his bat in time to Jordan, while Stuart Broad located Marlon Samuels’s edge with a fuller delivery that held its line.

It took a splendid one-handed catch low down at slip by Jordan off Tredwell to remove opener Kraigg Brathwaite, who batted 37 overs for his 39.

But Blackwood, having hit Tredwell for six off his second ball, calmed down somewhat in alliance with Chanderpaul to keep England at bay for the remainder of another day extended by the slow over-rate.

Earlier, England’s hopes of pressing on well beyond 400 were ended by the loss of four wickets for four runs after they resumed on 341-5.
Stokes had added only eight to his overnight 81 when he guided Jerome Taylor straight to gully, before Tredwell was caught behind off Jason Holder.

Roach accounted for a flat-footed Buttler, whose duck spanned 22 balls, and Broad sliced the same bowler to backward point in his next over.
From 361-9, England were thankful for a last-wicket partnership of 38 between Jordan and Anderson which was ended when the latter chipped Samuels tamely to short cover.