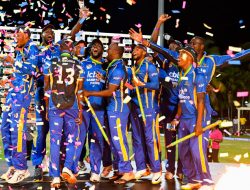 (CMC) – Shai Hope says he will use his outstanding performances in the just concluded Regional Super50 to kick-start his career for West Indies.The 23-year-old right-hander struck 101 in Saturday’s final to help power Barbados Pride to the Super50 title with a 59-run victory over Jamaica Scorpions at Coolidge Cricket Ground.
Hope finished the tournament as one of the leading run-scorers with 482 runs and two centuries, following his 125 in the semi-final against Leeward Islands Hurricanes last Thursday.
“I just have to stay consistent, consistent in front and behind the stumps. (I have to) score as many runs as possible and take the chances that come to me,” Hope said in reference to his international career.
He added: “We set out to win the tournament, I set out to score runs, perform for my team and I was glad to be able to do that.”
It was Hope’s 127-run, sixth-wicket partnership with captain Jason Holder which transformed the contest, after Scorpions had put a stranglehold on the Pride innings.
Hope struck five fours and five sixes in a 98-ball knock while Holder exploded in a 47-ball 69, as Pride clawed their way back from 138 for five in the 35th over to reach 271 for nine off 50 overs.
“The key was not to panic at all. It was a crucial stage there when we lost a few wickets,” he noted.
“But having said that, we knew we had batting right down to the end so it was just about capitalising on any bad balls they gave us and keep rotating the strike until we get down to those last 10 overs and then launch.”
He continued: “I wouldn’t say that they bowled badly, I actually think they bowled well especially in the initial stages and I just have to give credit to Jason, he came out and really gave the innings that boost that we needed to get to the 271.”
Hope has played seven Tests and four One-Day Internationals since making his West Indies debut two years ago.