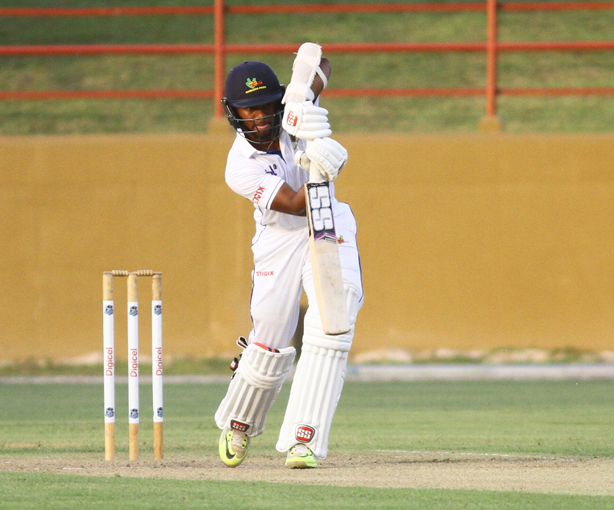 The 23-year-old Hope piled up a career-best unbeaten 215 as Pride, starting the second day at Kensington Oval on 293 for two, declared on an imposing 480 for three in their first innings.

Part-time off-spinner Roston Chase then picked up two wickets as Jaguars stumbled to the close on 119 for four, still 361 runs adrift of their target.

Raymon Reifer was unbeaten on 25 and was partnered by veteran left-hander Shiv Chanderpaul on 15, the pair having stabilised the innings after it slipped to 86 for four, 40 minutes before the close.

After Pride declared 50 minutes before tea, attacking opener Shimron Hetmyer fell cheaply for one to the fifth ball of the innings, caught at short-leg by Anthony Alleyne off fast bowler Miguel Cummins.

Test batsmen Rajindra Chandrika (24) and Leon Johnson (15) then added 52 for the second wicket, a partnership that saw Jaguars to the break on 30 for one.

Both failed to build on resumption, however, falling within 12 deliveries of each other. Chandrika drove Chase to substitute Justin Greaves at mid-wicket while skipper Johnson played back and was lbw to the same bowler.

Left-hander Vishaul Singh spent an hour over 15 before clipping a leg-side catch to wicketkeeper Shane Dowrich off seamer Kevin Stoute.

Earlier, Hope took centre stage in an innings which spanned 391 balls and a shade over eight hours, and included 24 fours and three sixes.

Resuming on 118, he raced to his 150 on the stroke of the first hour and then raised his double hundred about 45 minutes after lunch off 378 balls.

Along the way, he put on 154 for the third wicket with Shamarh Brooks who converted his overnight 14 into 67 — his 13th first class half-century which came off 124 balls and included nine fours and a six.

Hope also added a further 76 in an unbroken fourth wicket partnership with Roston Chase who was unbeaten on 33 off 43 deliveries at the end.

The knock was Hope’s fifth first class triple figure score, bettering his previous best of 211 against Windward Islands Volcanoes at the same venue two years ago.

S Chanderpaul not out 15