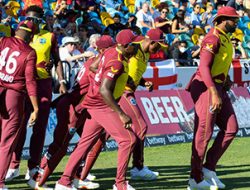 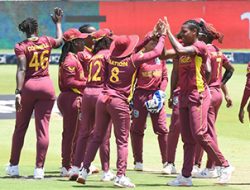 Dottin And Matthews Take West Indies To Super Over... 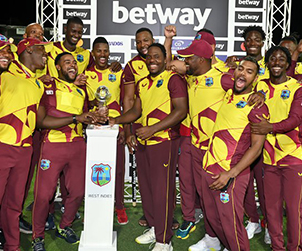 Holder The Hero As West Indies Get Amazing Series Win

Holder the hero as West Indies get Betway Series win

Jason Holder became the first West Indies bowler to take a hat-trick in Twenty20 Internationals and only the fourth player of all time to grab four wickets in as many deliveries, as the home team had a sensational win over England to climax the five-match series on Sunday night.

With England requiring 20 runs from the final over in pursuit of 180 in front a carnival-like crowd, Holder knocked over Chris Jordan (7), Sam Billings (41), Adil Rashid (0) and Saqib Mahmood (0) to send the innings crashing to 162 all out with a ball spare and hand West Indies a precious 3-2 series win over the World Number 1 ranked side.

Holder, whose two previous overs went for 25 runs, started with a no-ball but then kept Jordan scoreless from the next delivery before getting him to hole out to mid-wicket off a low full toss. In a sensational end to the contest, Billings then carted the very next delivery down the throat of substitute Hayden Walsh at mid-wicket again before Adil Rashid skied the hat-trick ball to Odean Smith at deep square.

Then with his supporters in the stands chanting “Jason, Jason”, Holder bowled Saqib Mahmood off the inside edge with a full length delivery which brought these memorable series to a historic end. He finish with 5-27 as West Indies clinched their second multi-game series win over England. After the win Holder was congratulated by the legendary Sir Garfield Sobers, in front the pavilion named in his honor.

Holder again confirmed his status as one of the world’s leading allrounders across all formats and was voted Man-of-the-Match and Man-of-the-Series. He said the performance was redemption for a below-par game in the fourth Betway T20 International on Saturday night.

“A classic finish. It probably wasn’t the best of starts for myself but for me, I always try to stay in the game and you never know how this game can go,” he said. “Last night was a topsy-turvy game for me as well, starting well but not being able to finish but it’s the total opposite today, not starting well but being able to close the game out.”

Holder was supported by new-ball partner, outstanding left-arm spinner Akeal Hosein, who claimed four for 30, and set England back by removing dangerman Jason Roy for eight with the fifth ball of the innings, the right-hander edging a sweep into his pad to be caught by wicketkeeper Nicholas Pooran running around to short leg.

James Vince put England back on course with 55 off 35 balls, striking seven fours and a six, and putting on 32 for the second wicket with Tom Banton (16) and 46 for the third wicket with captain Moeen Ali (14).

Hosein returned for his second over in the 12th to engineer a slide which saw for wickets tumble for 33 runs in 31 balls and though Billings, who hammered a four and two sixes in a 28-ball cameo, added 43 for the seventh with Jordan, the advantage was with West Indies at the start of the final over.

“It’s wonderful. I thank the Almighty for giving us this victory but having said, I think every single one in that dressing room, we rallied together throughout everything,” said captain Kieron Pollard. “Every time we won a game there was something negative against us but we came out today and the guys really rallied so well, well done to every single one of them and all the supporters who supported us.”

Pollard had earlier top-scored with an unbeaten 41 off 25 balls as West Indies, opting for first knock, posted 179 for four off their 20 overs. West Indies slowed at 113-4 at the end of the 16th over before Pollard combined with Rovman Powell, who belted a 17-ball 35 not out with a four and four sixes, to plunder 66 from the last four overs in an unbroken fifth wicket stand worth 74.

Opener Brandon King chimed in with 34 off 31 balls with two fours and two sixes, laying the foundation for the innings in a 59-run, second wicket partnership with left-hander Kyle Mayers whose 31 came from 19 deliveries with three fours and two sixes.

West Indies team departs from Barbados on Monday for India where they will play three T20Is and three One-Day Internationals.