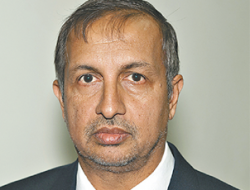 COLOMBO—West Indies captain Jason Holder said the loss of seamer Andre Russell to injury and having to resort to part-time bowlers, were key in the one-wicket defeat to Sri Lanka in the opening One-Day International on Sunday.

Russell limped out of the attack in the fifth over with Sri Lanka motoring along at 46 for one in pursuit of 163 off 26 overs, and Holder was forced to summon Jonathan Carter and Johnson Charles to trundle their medium pace at the crucial late stage of the game.

“It’s obviously very disappointing. I thought the way we fought ourselves back into the game, to lose there in the penultimate over was very, very hard, although we thought we were in with a chance there when he had them nine down,” Holder said.

“It’s just unfortunate we lost Russell at that stage, I felt his overs would have been crucial on that track and we had to make up with two part-time bowlers which really didn’t pay off in the end.

“But again, credit to the way the guys fought down to the end, and we still got wickets from a part-time bowler and made a game of it.”

Sri Lanka seemed poised to pull off an easy win at the R Premadasa Stadium when they raced to 132 for four at the end of the 18th over but off-spinner Sunil Narine grabbed three wickets in the 19th and Carter, another two in the 24th, as five wickets crashed for 20 runs.

With the hosts tottering on 152 for nine, Charles was asked to bowl the penultimate over with 11 runs required from 12 balls. He started with a wide, also sent down a front-foot no ball, and Ajantha Mendis deposited the resulting free-hit out of the ground, to end the game.

Holder said resorting to Carter and Charles was unavoidable and explained he was forced to bowl them late because of the need to use the frontline bowlers to arrest Sri Lanka’s progress, after they got off to a flyer.

“We were short a bowler, and short of crucial overs from a frontline bowler so we had to find some way to make up. The only way we could fight our way back into the game was by getting wickets,” Holder explained.

“We got wickets but had to bowl our best bowlers out before the allotted overs [were finished]. In that case, you have to bank on somebody to make up the last few overs and it didn’t pay off in today’s game.”

He continued: “We were off to a pretty bad start in terms of the power play and we had to pull back the game by taking wickets. It was difficult to contain them and restrict them without taking wickets.

“We had to take wickets to get the [advantage] and the only way I could get wickets was by going to my main bowlers. I would rather go down that way than go down with the part-time bowlers and leaving my main bowlers with overs.”

Russell’s fitness will be assessed over the next few days as the visitors prepare for the second ODI at the same venue on Wednesday. CMC