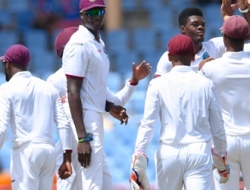 Jason Holder, the West Indies captain, felt the gulf between the region’s first-class structure and the international level stood exposed, as they lost by 237 runs in Gros Islet to concede the four-Test series to India with one match still to play.

“It is going to be difficult. Test match cricket is very different from our first-class cricket at this point of time. I have had the privilege to play first-class cricket and I’ve also had the privilege to play Test cricket and I can see a vast disparity between the two,” he said. “It is a situation where many of us coming to international cricket and are trying to learn on our job. It is definitely not easy, but it is something that we are faced with and I hope the guys can learn quickly.

“Hope that our guys’ bodies are accustomed to the workloads of international cricket because it is far different from first-class cricket. For instance you get a first-class game where a fast bowler hardly bowls the amount of overs we have bowled in this series. For the last five to 10 years we have had spinners dominating first-class cricket in terms of wickets taken. So it is a transition that we have to try to open up and adjust to as quickly as possible. It is by no means easy and sometimes we don’t make it easy for ourselves.”

West Indies, who had to bat out a minimum of 87 overs to save the Test, were bowled out for 108 in just 47.3 overs, with just one batsman – Darren Bravo – crossing 20. They had fared only marginally better in the first innings, being bowled out for 225 after being handily placed at 202 for 3 at one stage.

“We haven’t been able to put up reasonable first-innings totals which have hampered us in the recent past. If you don’t put up a good first-innings total, then you are chasing the game,” Holder said. “We need to knuckle down. As batsmen, we need to be accountable for our actions. At the top, predominantly, we haven’t been consistent; not getting starts we’ve been looking for.”

Asked to elaborate on the batting struggle, Holder said it was simply a case of being too overcautious at times, apart from failing to learn from their mistakes in the first innings. “I think the difference from here to Jamaica is that we also spent time but we didn’t score,” he said. “I think most of the batsmen have spent some time initially but they haven’t tick over the scoreboard as well as we would like. I can’t speak for every batsman and it is a situation where each batsman needs to cope, how we are going to score and how we are going to occupy the crease. So sitting here is difficult to answer but all I can say is that the responsibility is on the batsmen at the present time.”

Holder emphasised the need to string together patches of domination before looking at bigger goals, something the team did sporadically in Jamaica, and then on the first two days in St Lucia before things slipped away from them.

“At the beginning of the series, I made very clear that we need to show signs of improvement. We have had a really tough tour in Australia in terms of our bowling and I have seen significant improvements in terms of our bowling,” Holder said. “We have been inconsistent with the bat for quite a while now. You have to make steps forward and you just can’t leap. As a baby you need to crawl before you can walk.

“Definitely winning is a priority but we need to put ourselves in position to win games but the only way we can do that is by taking 20 wickets and at least putting up a very good first innings total in terms of securing the draw and then push for win. But we haven’t been able to put ourselves in those situations, to be quite frank. I think, moving forward, we need to be more consistent in terms of getting those first-innings total, 350-plus, obviously taking 10 wickets up front and coming back and taking the other 10. I think that’s the direction in which we need to move towards.”