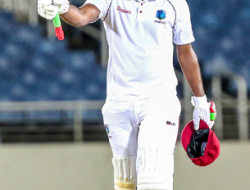 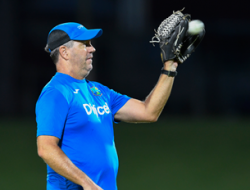 Jason Holder and Shane Dowrich set a few new records on the fourth day of the second Test at Queens Sports Club. The two are close friends away from cricket, and the experience of watching his friend reach a maiden Test hundred was a “really enjoyable” experience for Holder.

“Shane has obviously not had the best time in the recent past and was in need of a score, so it was good to be out there,” Holder said. “That was my determination – to get him to a score. We were under pressure, the Zimbabweans bowled well yesterday. We really needed a partnership to get back in the game and it was down to me and Shane to put one up. For me it was just getting Shane in and then from there we were able to relax and flow.”

The pair put on 212 for the eighth wicket – a new record for West Indies. This was also only the second time in history that Nos. 8 and 9 have both scored hundreds in the same innings of a Test. But Holder wasn’t focused on records.

“I wasn’t really aware of them,” he said. “We just wanted to bat some time and put a big partnership together. We got to 100, then 150 and up to 200, which is a remarkable achievement, especially on that pitch with the way the Zimbabweans had bowled. Having said that, we were disappointed to lose our wickets at that stage. We wanted to lead them by at least 150 runs, but I’ll still take 120. At the end of the day I think it was a special effort given where we were.”

West Indies had been in the doldrums at 230 for 7 when Holder and Dowrich got together, but it was Zimbabwe who ended the fourth day in trouble. A 94-run stand between Sikandar Raza and PJ Moor gave the hosts a slim 18-run lead, and Holder suggested that patience would be key in taking Zimbabwe’s remaining six wickets.

“Tomorrow’s first session will be really crucial,” Holder said. “We need to break this partnership – Raza’s playing really well and so is PJ Moor. If we break the partnership early then we’re in with a really good shout of winning the game. Having said that, it’s not a pitch where you can go and blast out people and look for wickets. It’s turning really slowly for the spinners, and for the seamers it isn’t really carrying. We’ve got to be patient, use the surface as much as possible.”

Holder will at least have the experience of Kemar Roach to bank on going into the last day. While he has not run through Zimbabwe, Roach has filled the role of senior seamer well, removing both openers in Zimbabwe’s second innings.

“Kemar has done a remarkable job,” Holder said. “The seamers who have been successful here have struck with the new ball. Kemar has been able to do that for us today. Coming back with the older ball he has created a lot of pressure and kept things very tight. He’s been outstanding. Every time I call him he gives 110%.”