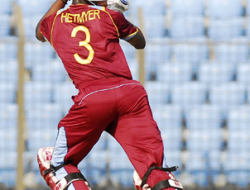 Jason Holder says he has learned a lot from West Indies’ World Cup campaign and hopes to continue as one-day captain under new coach Phil Simmons.

Holder’s side suffered a 143-run loss to New Zealand on Saturday to exit the tournament in the quarter-finals.

The 23-year-old seamer said he was looking forward to working with Simmons, who takes charge for next month’s three-Test series with England.

“There’s been criticism but I’m proud of the way I’ve stood up,” said Holder.

“I’m not one to shy from responsibility or duck my head when things get tough.”

West Indies were unable to cope with New Zealand, for whom Martin Guptill scored a World Cup record 237 not out to propel the co-hosts to a total of 393-6.

Left-arm seamer Trent Boult then took 4-44 as the Windies were dismissed for 250, with Chris Gayle top-scoring with a rapid 61 from 33 balls.

“The ball was going all over the place at one stage and when people are set it’s difficult to contain them,” said Holder, who conceded 76 runs in his eight overs in Wellington.

“It was just one of those days when we didn’t execute our game plan and we paid for it.

“We bowled too full and then at the end we didn’t land our yorkers.

“If you were too short it just sat up. In terms of the right length on the pitch you had to be that in-between length and also vary your pace a lot. And what we didn’t do was apply ourselves when we batted but obviously 394 is a big ask.”

West Indies reached the last eight on net run-rate courtesy of a victory over UAE in the final game of a pool in which they also comfortably beat Pakistan and Zimbabwe but lost to Ireland, South Africa and India.

“I had high hopes coming into the tournament, but it has been a rollercoaster,” accepted Holder. “Although we’ve had some good games, we’ve had some bad games.

“I expected a tough job when I accepted the captaincy and it’s been a tough time but I’ve learned a lot in terms of managing our players and trying to get the best out of them.”

West Indies will have a new coach in place against England after their former player Simmons – whose nephew Lendl has been a Windies regular at the World Cup – agreed to end his eight-year stint with Ireland to take charge of the Caribbean side.

“Our main focus at this point is to get ready for the England series,” added Holder. “We’ll obviously sit and have some discussions and come up with a plan going forward.

“It’s my first time working with Phil, so I’m just looking forward to that.”

Taken from the BBC