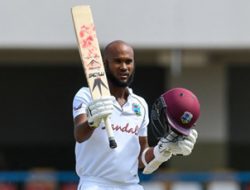 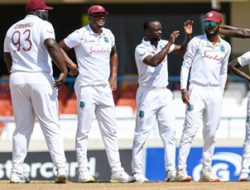 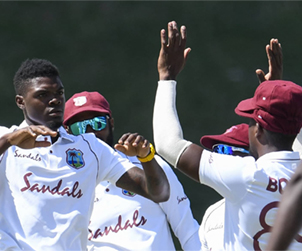 1st April 2021 Comments Off on Holder and Joseph Take Two Wickets Each to Give West Indies Advantage Views: 918 News

West Indies took control of the match on a rain-hit day as they took five wickets for 114 runs in the 42.1 overs allowed. Heavy rain caused disruptions in the final two sessions, allowing only 1-¾ hours play as the home side reduced Sri Lanka to 250-8 when a final shower swept across the ground again at 5:07 pm, halting play for the fourth and final time.

The visitors still trail by 104 runs, leaving West Indies with the clear advantage but were being held together at the close by Pathum Nissanka who has so far stroked an unbeaten 49 off 119 balls with four fours. Dinesh Chandimal, on 34 overnight, was dismissed for 44 while Dhananjaya de Silva, on 23 at the start, made 39.

West Indies bowlers, like they did on Tuesday’s second day, remained disciplined and penetrative, seamers Jason Holder (2-40) and Alzarri Joseph (2-64) leading the attack. Resuming from their overnight 136-3, Sri Lanka lost both overnight batsmen in the session after the pair had extended their fourth wicket stand to 75.

Chandimal perished in the fifth over of the day, failing to keep down a pull off Shannon Gabriel and was caught by substitute Hayden Walsh strategically placed at deep square for the shot.

Dhanajaya combined with Nissanka to resist West Indies, taking Sri Lanka to the drinks break without further loss in a 25-run stand for the fifth wicket. In a surprise move, captain Kraigg Brathwaite introduced Jermaine Blackwood into the attack and Dhanajaya fell to the off-spinner who hit the right-hander in front. It was Blackwood’s first Test wicket since he took two against Bangladesh back in 2014.

When rain forced lunch to be taken 10 minutes early, the momentum was with West Indies especially with Sri Lanka stumbling on 189-5, but the weather delayed the restart until 1:20 pm. Only 55 balls were possible during the second session, but it was enough time for West Indies to dismiss Niroshan Dickwella for 20 and Suranga Lakmal for six.

The left-handed Dickwella, unbeaten at lunch on nine, fell half hour following the resumption when he played back to Holder and got an inside edge through to keeper Joshua Da Silva at 203-6.

Joseph removed Lakmal, the right-hander clipping a catch to Brathwaite at short mid-on but only a further seven balls were possible before rain forced an early tea at 217-7. Holder then struck after the resumption when he had Dushmantha Chameera caught at the wicket for two.

The match will resume on Thursday at 9:30am (8:30am Jamaica Time) with a minimum of 98 overs due to be bowled.