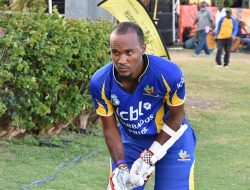 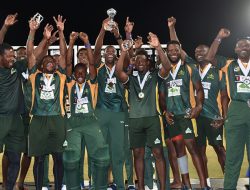 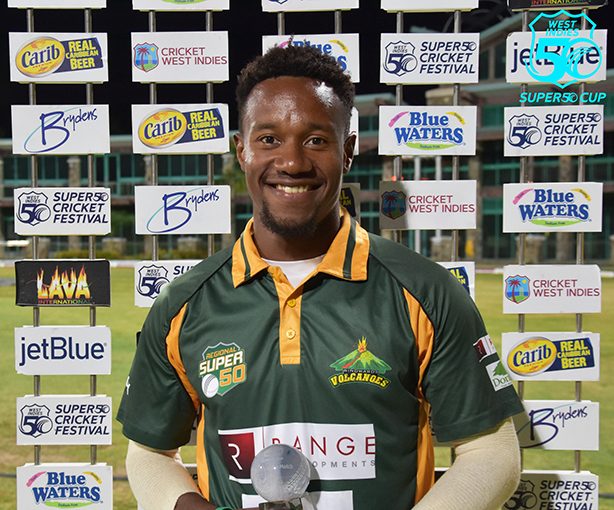 Guyana won the toss, electing to field first. Johnson Charles was the first Windward batsman to fall, he made 8 when he chucked a Romario Shepherd delivery onto his stumps. Devon Smith and Tyron Theophile then went about rebuilding the Volcanoes innings. After 25 runs together, Smith was brilliantly caught by Shivnarine Chanderpaul for 25. Kirk Edwards and Theophile combined for a solid 73-run partnership which steadied the Volcanoes after the 2 early wickets. Edwards then fell for 27. No panic was shown from the Volcanoes batsmen as Theophile was joined by Kavem Hodge and both batsmen relished the situation before them. They matched each other stroke for stroke and combined for an unbeaten partnership of 107. Theophile knocking 55 of them; while Hodge accounted for 51. Theophile fell soon after, bowled by Chanderpaul Hemraj for 107 off 104 balls. Hodge went a few deliveries later. Kyle Myers and Captain Shane Shillingford ended the Volcanoes innings on 18 and 16 not out respectively. Windward Islands Volcanoes posting 286/7 from their 50 overs. Bowling for Guyana Jaguars, Ramaal Lewis had the best figures, with 3/54 from 9 overs.

Chanderpaul Hemraj and Tagenarine Chanderpaul opened the batting for Guyana, but Hemraj fell for 4 to Ryan John. Then came a partnership rarely seen in sports, the father son duo of Shivnarine Chanderpaul and Tagenarine Chanderpaul manned the creases for Guyana. In what seemed like a comfortable partnership, Tagenarine lost his wicket in the most bizarre fashion. His father struck the delivery straight back, which ricocheted off the bowler onto the non-striker’s stumps, thereby running out Tagenarine. Seeming to make amends for the dismissal of his son, Shivnarine then went on a run spree much to the delight of the Jaguars supporters. He became the first of Hodge’s 3 wickets, as he was caught for 34 from 38 deliveries. Leon Johnson once again found it difficult to add to his run-tally, as Hodge had him caught and bowled for 4. Christopher Barnwell and Anthony Bramble had a good partnership going. They shared 39 runs together but the rain came and after the resumption, both men fell 6 runs apart. Barnwell for 25 and Bramble for 27. The unlikely partnership of the Jaguars innings came between Sherfane Rutherford and Verasammy Permaul, as the tailenders batted valiantly to try and achieve the remaining spot in the final. This pair put on 71 before Permaul was brilliantly caught by Hodge for 37 off Obid McCoy. Rutherford was left frustrated as he was cheekily runout by Mc Coy who kicked the ball onto the stumps, leaving Rutherford stranded on 49. Ramaal Lewis struck 17 not out, but the writing was already on the wall as the Guyana Jaguars innings finished on 231 all out in 44.2 overs, 52 runs short of the revised Duckworth Lewis target of 284 from 47 overs. Kavem Hodge took 3/49 from 10 overs.

Kavem Hodge was Man of the Match.