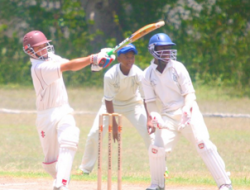 7th August 2015 Comments Off on Guyana’s under-19 cricketers praised as ambassadors Views: 1820 News

GEORGETOWN, Guyana (CMC) — Guyana’s young cricketers have been described as “excellent ambassadors” after defeating Jamaica to retain their WICB Under-19 title.

The praise has come from the Guyana Cricket Board (GCB), whose president Drubahadur led a delegation to welcome the champions on their return from Jamaica.

Guyana defeated the hosts by four wickets to lift the 2015 champions’ trophy on Sunday.

“It was evident that this team played as a unit and they enjoyed each other’s achievement. That is something vital if any team is to be successful and I am pleased that at the youth level, you guys showed maturity and stick to your game plan,” said Drubahadur.

“Apart from the victory, you fellas have been excellent ambassadors for your country and the GCB. We have been following your behavior as well and we received good feedback”.

Chasing 246 for victory, Guyana reached 250 for six off 46 overs with Hetmyer scoring 55 and Sherfane Rutherford and Kassem Khan making 45 and 43 not out respectively.

“You didn’t become complacent and underestimate your opponent at any time, even when you had already qualified for the final,” said the country’s Director of Sport Christopher Jones who was also on hand to greet the players.

“You went out and played professionally. That is what top sportsmen do and you should be extremely proud of yourselves.”

Four Guyanese players- Shimron Hetmyer, Tevin Imlach, Akshaya Persaud and Keemo Paul – were called up to the West Indies Under-19 World Cup training Camp which started on Tuesday and runs until August 17 at the West Indies Mona Campus in Barbados.