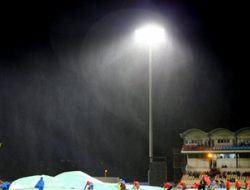 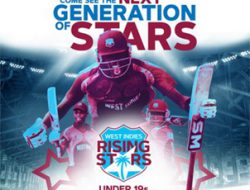 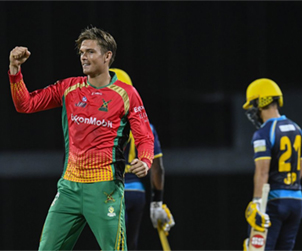 23rd September 2019 Comments Off on Guyana Make It Six In Six Against Tridents Views: 509 News

Guyana Make It Six In Six Against Tridents

Guyana Amazon Warriors opened a three-point lead at the top of the 2019 Hero Caribbean Premier League (CPL) table as they extended their perfect start to the season to six matches and guaranteed a playoff spot with a rain-affected victory over Barbados Tridents at the Kensington Oval.

The Warriors dismissed the Tridents for just 138, Chris Green taking the last four wickets to fall and conceding just 14 runs in his 3.2 overs, before reaching 77/2 after 10 overs of the run-chase when heavy rain held up play for an hour. When play resumed, the Warriors’ target of 62 from the last 60 balls had been reduced to 20 from 24.

They added four from the 11th over before the rain returned again to finish things off with the Warriors 81/2 and still comfortably clear of a DLS par score of 69.

The one over possible after the initial rain delay did at least allow Brandon King to complete a fine half-century having been left stranded on 49 not out when the players had first left the field..

He and Chandrapaul Hemraj had been watchful at the start of the Warriors’ initial pursuit of 139 for victory but still took the score past 50 in the Powerplay as King in particular began to cut loose.

King took Ashley Nurse for 10 in two balls as the spinner’s first over leaked 15 runs, while King smashed his second Hero Maximum from the final ball of the sixth over as Jason Holder dropped short.

That took the total and partnership to 52 before Nurse’s problems continued in the field as he put down a simple chance offered by King on 30. Two balls later, King planted his third six of the night over midwicket.

There was some respite for the Tridents when Hemraj chipped a return catch to Sandeep Lamichhane for 20 and Shimron Hetmyer was very smartly caught and bowled by JP Duminy for just 2 but by then the required rate was already down to just a run a ball.

King continued to impress, taking Lamichhane for back-to-back boundaries to end the tenth over and, as it turned out, the contest as initial drizzle turned quickly into something more substantial.

With 77/2 on the board, the Warriors were 16 ahead of the DLS par score of 61, with the only minor disappointment for them being King left stranded one short of a half-century on 49* from 30 balls. Something he rectified when they returned to the field.

Earlier, The Tridents lost regular wickets throughout a rather frenetic innings, which meant even when the run-rate was healthy – 63 runs came in the six-over Powerplay at the top of the innings – their position was always fragile.

Unsurprisingly, the run-rate slowed as the hosts were forced to keep one eye on their wickets in hand.

And even that approach didn’t work out in the end, Green taking the last four wickets of the innings to leave the Tridents well short.

The tone was set in the very first over, a slightly wild effort from Keemo Paul that brought 17 runs, but also the crucial wicket of Johnson Charles as he sliced a wide ball all the way to Imran Tahir at third-man.

Justin Greaves, so impressive on debut, got a couple of good-looking boundaries away but holed out off Romario Shepherd for 11. That too was a recurring theme. Alex Hales looked good for his 24 before picking out deep midwicket from the first ball of Tahir’s second over, while Jason Holder, Leniko Boucher, Raymon Reifer and Lamichhane all fell going for big shots early in their innings.

Even Duminy, who held the whole thing together with a 32-ball 38 featuring two fours and two Hero Maximums, was caught in the deep attempting to pull Green over square-leg.

Jonathan Carter was undone by a fine leg-break from Tahir, lbw after a lengthy deliberation from the umpire, while Nurse was smartly stumped by Nicholas Pooran to help Green on his way to figures of 4/14.

That represented the second-best bowling return of the 2019 Hero CPL – only Green’s team-mate Shepherd has done better, with 4/13 against these same opponents in Match Six.